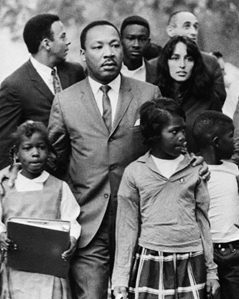 At critical moments in our nation’s history, it is America’s children who have changed the hearts and minds of the public through social activism. There are over 100 years of documented history of young people leading the charge toward progress.

Kids have fought and won battles for child labor laws, civil rights, equal access to education and an end to segregation. Today, the torch has been passed down to youth activists who are fighting with everything they have to pass immigration reform and to end deportations that are tearing their families and communities apart.

The following is a brief history of youth-led social activism in the United States:

1903: Four hundred juvenile textile workers marched from the coal mines of Pennsylvania to the home of President Theodore Roosevelt in New York with Mother Jones to demand child labor laws the respected the rights of working youth. (Image via The Newberry.)

1957: The Little Rock Nine enrolled in an all-white school in the segregated South, facing daily taunting and ridicule in order to pave the way for equal access to education for all Black students. (Image via Chikaoduahblog.com.)

1960: Six-year-old Ruby Bridges made headlines when she enrolled as the first and only black student in a segregated, all-white school in New Orleans, Louisiana. Pictured here, Ruby is escorted from the school by U.S. Marshals to face the crowds of angry protesters who shouted and threw things at the little girl. (Image via Wikimedia.)

1963: In Birmingham, Alabama, kids walked out of schools across the city to join the Children’s Crusade in an effort to fight for civil rights and end segregation. Head of Birmingham police and notoriously racist segregrationist Bull Connor brought out fire hoses to ward off the children and set police dogs to attack them. Pictured here, Reverend Dr. Martin Luther King, Jr. walks through the streets of Birmingham with child activists. (Image via childrenscrusadenhd.weebly.com.)

2013: Last year, more than 100 children came to Capitol Hill to lobby on behalf of themselves and their families to push for immigration reform. They participated in rallies, marches and peaceful actions in Washington and in their home states. Several children last year brought national attention to the need for immigration reform, including the two teen girls who confronted Speaker John Boehner at Pete’s Diner on why he was allowing members of the Republican Party to stall immigration reform.

This week, youth activists are back in D.C. fighting for immigration reform. Follow the Fair Immigration Reform Movement on Facebook and Twitter for the latest updates on what these courageous kids will do next.