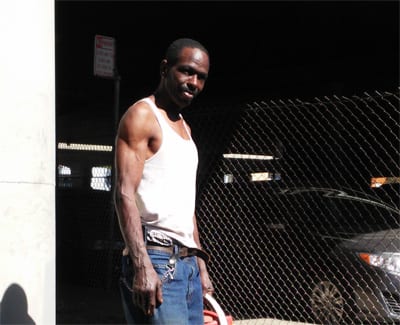 The first thing that struck me when I moved to the Bay Area three years ago was the extraordinary cost of rent. During my first year, I paid outrageous amounts to live with six other guys in a house meant for three. Over the past three years, as my cost of living rose, I watched as more and more luxury condos popped up, changing the city’s skyline and driving working-class people like me even further into the suburbs.

At the same time, I noticed other means of shelter appearing. I call them tent cities–vacant lots or patches of land beneath overpasses where tarps, tents and furniture would seem to materialize overnight, providing shelter to people with nowhere else to sleep at night.

One area that caught my attention was a place I saw every day. I noticed a number of tents began to occupy the land beneath an overpass on my way home from work. My interest deepened after I found out that the city of Oakland had evicted the community, and a day later, they had returned.

The day I met John Martin happened to be a celebration. It was his wife’s 51st birthday and the community was preparing her a dinner and party. I had missed the cake being cut, but was lucky enough to stop in as the chicken wings were passed around. John and his wife shared a couple dances to some R&B songs as they embraced each other, and the community joined in the celebration.

I was finally able to ask John if he could share his story with me. I was invited back a couple days later to sit down with him. The scene had calmed down since the previous day as John sat in deep thought, staring at a chess board as the afternoon traffic drove by. In-between chess moves and checkmates, John started to open up about his past.

John is originally from New Orleans, but was forced to move when Katrina left his home in ruins. “We were stuck in the Superdome for three weeks until they moved us to Texas,” John said.

He lived in Houston until crime rates skyrocketed and the public started to blame it on Katrina refugees. “The government in Texas said ‘you got to go.’ So they gave us plane tickets to wherever we wanted, and I chose California.”

When John moved to California, he was able to get a job as a laborer with Pacific Steel. “After four hours of overtime, I was making double-time–that’s almost $40 an hour. They’d have to run me off the job.”

But John eventually encountered a back injury that would leave him on workers’ compensation.
“The workers’ comp was $1,300 every two weeks,” he said, “but that’s when my past caught up with me.”

John was caught on drug possession and theft charges that would give him five years of probation.

45 days before the end of his probation, John was pulled over for breaking curfew. This allowed the police to search his vehicle where they found open containers of alcohol. John lost his workmen’s comp.

“That’s what put me under the bridge,” he said.

Since then, John has been living in a community of other people who are unable to find housing. Even without causing any problems, this community is evicted about every two weeks from their spot.

“I’m used to eviction notices. This is just another one,” said John, handing me a notice from the city of Oakland.

They prepare their things to move, but with no solution to the housing problem in the Bay Area, others will soon occupy the spot they’re leaving.

So what’s the solution for John? According to David Campos, Supervisor of San Francisco’s District 9, “If you’re currently looking for housing in the city and can’t afford market rates, you have three choices: be homeless, leave or get on a long waiting list for low-income housing.”

Unfortunately, he’s right. San Francisco opened its public housing waiting list in January for one week. There are currently 7,000 families on the list, 1,100 of whom are homeless. With only 178 refurbished units, the amount of housing falls drastically short of the need.

There is no quick and easy solution. What San Francisco and the rest of the country needs is a new commitment to ending the housing crisis that includes a massive reinvestment in affordable housing.

That takes work. Not coincidentally, there are millions of people across the country looking for just that.

On April 29th, Senators Elizabeth Warren and Sherrod Brown, along with several of this country’s leading thinkers, movers and shakers, will come together in Washington, D.C. to unveil a plan to address these issues. Community Change for Community Change, Jobs With Justice, the Center for Popular Democracy, The Leadership Conference on Civil and Human Rights and Working Families Organization are launching Putting Families First: Good Jobs for All, a major initiative to invest both in needed infrastructure such as affordable housing, highways and bridges, and also in everyday Americans who are in need of good jobs with living wages, benefits and fair scheduling practices.

Luckily for John, he has been granted disability benefits and workmen’s compensation back pay from 2013. This will most certainly provide enough income to grant John a new start and hopefully a permanent housing situation.

I remember something John said to me on the first day I met him, as we celebrated his wife’s birthday. Music was blasting from the stereo as smoke from the grill filled the air. Even though wasn’t the most typical of settings for a birthday party, with traffic rumbling overhead on 880 Highway, the community enjoyed sharing in each other’s company and invited me (a stranger) to join in the celebration.

“I’ve never quit,” John told me, looking over at his wife. “This is just for now. But even with my situation, I’m still trying. I’m a good man that was just caught slipping while I was trying to be a productive member of society. My wife has everything she needs today. I’m still providing, even if I’m under a bridge.”

To learn more about Putting Families First campaign or the launch of the campaign on April 29th, visit PutFamiliesFirst.org.

John is featured in the photo above. Photo credit: Mark Ortiz.