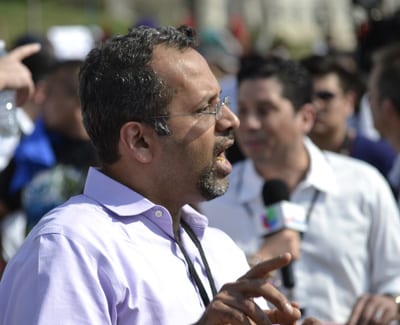 ‘Ain’t Got No Wiggle Room’

Poverty is everywhere. More than one in three Americans—106 million people—live below or perilously close to the federal poverty line. If you pick up a newspaper or magazine, turn on the radio or flip on the television, there are countless stories about poverty and income inequality. Politicians on both sides of the aisle are staking their claims to a national anti-poverty agenda. Republican presidential hopefuls like Paul Ryan and Marco Rubio have suddenly taken up the issue. And six long years after the Great Recession, Democrats have finally embraced raising the minimum wage. The conversation about poverty is pervasive.

Yet, poverty is nowhere. The men, women and children who are part of the 106 million striving and struggling Americans are invisible and voiceless. They are invisible because the debate about poverty is swirling around them but does not actually include them. They are invisible because they are not recognized as people but rather as a condition or a problem. They are blamed rather than empowered. They are voiceless because they are locked out of the corridors of power where conversations about poverty are happening. At best, their stories serve as useful anecdotes that add color to the harrowing statistics.

It’s past time for people who are poor to tell their own stories so that we can then have a real conversation about what actually contributes to economic success or failure in America.

Pina Orsillo Belgrano has one of these low wage jobs that keeps her struggling. Pina, 58, is a single mother in Seattle who worked as a restaurateur, travel agent and a real estate agent in 2008 until the economy tanked and she lost those jobs. The only job Pina could find was a $12 an hour job in the hotel industry. Pina does not earn enough money to protect her home from being foreclosed.

Pina is unfortunately among the millions of people living in a society where the economy no longer allows them to afford the basics. We have the answers to solve these problems but there is a deep misalignment of power in our society that is preventing us from seeing it and getting there. That must be our north star; building power among people who don’t have it.

And that’s why the Center for Community Change Action (CCCA) is rooting our economic justice campaign in conversations with people who are living on the brink so we can hear how they define their situation and how we can make our economy fairer for everyone.

There are positive signs.  The WASH New York campaign clearly demonstrated the effectiveness of building a movement. After more than a decade of grassroots organizing, the New York carwash campaign helped carwash workers, who are paid less than minimum wage with no additional pay for overtime, fight their way out of poverty. These workers, with the strong support of community organizations, joined together to demand better pay and working conditions.

No one thought they had a chance. The owners are too big, too spread out, and there are too many of them, the workers were told.

These “carwasheros” didn’t let the naysayers stand in their way. Because of their efforts, they now have higher wages, increased job security, posted job schedules and paid leave. They built a movement and they won.

Luis Rosales, who worked at one of the big car washes in Queens for more than five years said, “This is going to be a great change for our car wash. More importantly, we were able to show other workers that it makes sense to fight and win what seemed impossible.”

And now that the city of Seattle has a compromise deal to raise the minimum wage to $15 an hour, the highest minimum wage in the nation, people like Pina will earn more. With the extra money, Pina will be able to meet the income requirements to receive a loan modification so she can stay in her home.

CCCA is working with local partner organizations to raise the quality of jobs (including wages, benefits, and working conditions); ensure that low-income workers and job seekers have a fair shot at those jobs; and reduce barriers to employment that currently deny opportunities for people who have been incarcerated.

Sounds too lofty? Look at what people in America have accomplished when they banded together: equal rights for women, civil rights, child labor laws, voting rights.

In Youngstown, Ohio—a city that was hard hit by the recession and has been battling to come back ever since—I heard one of the best summaries of why we need this movement for good jobs right now. An African American man, Willis, said, “That’s poverty to me…where you ain’t got no wiggle room to enjoy life.”

The rich shouldn’t be the only ones with wiggle room. That’s why we’re building a movement with Willis, with Luis, with Pina. This is the only way we will create an economy that is just and fair for all Americans—especially for those who are paid less than what it takes to get by. And it’s the only way poverty will truly be nowhere.

Deepak Bhargava is Executive Director of the Center for Community Change Action, which uses political advocacy and electoral tools to help low-income people build political power and push for policy changes that improve their lives.