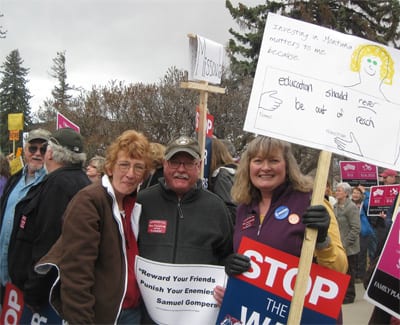 Anatomy of a Veto

Gary Sandusky is a Senior Field Organizer at the Center for Community Change.

In 2009, Center for Community Change assigned me to work closely with the Alliance for a Just Society director, LeeAnn Hall, on building a new, statewide social and economic justice organization based in Montana.  LeeAnn and I had been close colleagues dating back to the late 80’s when we worked together on a similar task in Idaho.

The group that had previously occupied center stage in the justice issue organizing world of Montana, Montana Peoples Action, was in the process of closing its doors.   And with Senator Baucus emerging on the national stage, particularly in the health care reform debate, the stakes were high to fill the gap left by MPA’s decline.

Some of our state allies and long term organizer friends helped us move around the state of Montana,  listen to a whole range of perspectives about the policy and organizing needs of Montana and then assess the appetite and willingness of a wide range of Montana community, faith and labor players to support the work to build a new group.   Those conversations are never easy and simple.    But what emerged out of those early conversations, out of a shared analysis regarding the limitations of Montana Peoples Action, and out of lessons learned  organizing in the Northwest was a vision for a hybrid model organization – Montana Organizing Project –  that could cover the huge geography of the state of Montana credibly.  And that organization, once built, had an outsize influence at the state level in producing the largest Montana rally on record, in beating back the tea party and in protecting the state budget cuts for everything from prescription assistance for the aging to education.

Anatomy of a Veto not only tells the story of how Montana Organizing Project was built and how it helped win a big fight, but it also delves into some of the principles at play in creating the scale needed to effectively win at the state level.   There are movement building and coalition building ideas here that could apply anywhere. Click here to read the full article.