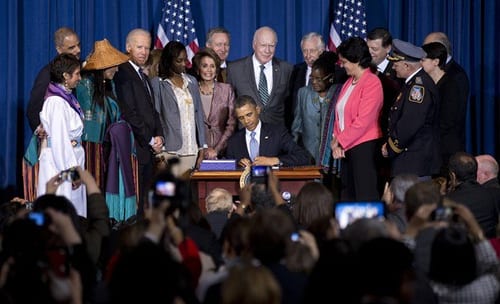 A Great Day as VAWA is Reauthorized

Today, President Obama reauthorized the Violence Against Women Act (VAWA), expanding protection to immigrants, LGBT individuals and Native Americans.  At the bill signing, President Obama spoke of when the bill was first passed in 1994, saying, “It didn’t just change the rules—it changed our culture.”  He described how VAWA started a conversation about domestic abuse and made it okay for victims to speak out.

After a prolonged battle to renew VAWA last year over Republican opposition to protecting immigrants, the Senate this year passed a bill that included coverage for immigrants, LGBT individuals and Native Americans. The House followed suit last week.

Deepak Bhargava, Executive Director of the Center for Community Change, praised Congress for their collaboration on this issue.  “This shows that Congress can put politics aside and focus on their constituents,” he said.

“I hope this spirit of bipartisanship will continue as Congress works to craft an inclusive immigration reform bill that focuses on updating our outdated immigration laws to clearly lay out a path to citizenship for 11 million Americans in waiting,” Bhargava added.