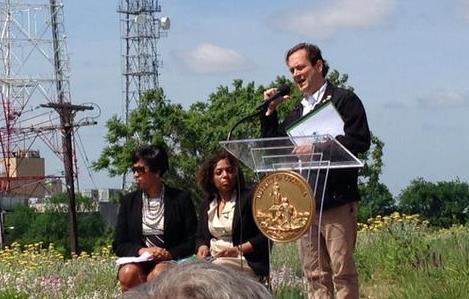 This post was originally published on the Coalition on Human Needs blog.

Caring for the least of these means going beyond feeding people through our local food bank or giving away needed clothing and toiletry supplies; it also means removing systemic barriers that keep people from prospering and living up to their God-given potential. It is through our membership with the Washington Interfaith Network (WIN), an Industrial Area Foundationaffiliate founded in the 90s by a group of Pastors, Rabbis, Priests and Imams that now consists of 50 faith institutions, unions and organizations, that we are able to leverage power to bring political change in our city in order to improve our community.

It was through WIN in 2011 that we launched the Clean River, Green City and Green Jobs Campaign to organize for jobs. Over the next 12 years, DC Water will spend $2.7 billion upgrading DC’s inadequate stormwater infrastructure to eliminate pollution and alleviate sewer system overflows. This project will be financed primarily through fees on the water bills of DC residents. WIN organized a citywide coalition of environmentalists, job-seekers and ratepayers to demand that this massive investment of public money deliver multiple benefits for the city, including clean water, living wage work and more green spaces.  It is ironic that our visions to bring jobs to the community tapped the very river that divides some of the city’s richest neighborhoods from the poorest.

Some may ask what the poorest neighborhoods in our watershed have to do with the storm water and our rivers. Why are we spending our energy on the pollution of rivers when people in our communities have been treated like waste and contamination for years? Shouldn’t we just leave the rivers to the environmentalist? No we shouldn’t. We believe that clean rivers are inextricably tied to the hope of our residents.

In the environmental world there is a term called Dead Zones. Dead Zones are a large region of water that is very low in oxygen, and therefore can’t support life. Just like there are some oxygen-deprived communities in the Bay where nothing will thrive or survive, there are some oxygen-deprived neighborhoods in Washington DC. When oxygen deprived waters in the Chesapeake Bay kill almost 300,000 fish in a summer – we call that a Dead Zone. When a 24 year old black male comes to me with no hope because he’s been looking for work for years, has never had a real job and he wants to be a man and feed his family, but there are no opportunities — we call that a Dead Zone.

Both Dead Zones represent the reality of denied opportunity on one hand and environmental destruction on the other hand, and the mutual destiny of both our communities and creation are tied to our willingness to pursue justice for both. It is our responsibility to breathe life back into our poorest communities and to resuscitate our polluted rivers. Our Dead Zones in DC are no different than the ones we have seen on national television in Ferguson and Baltimore. We have just managed to keep the stench of joblessness and homelessness at bay and away from the media and cameras.

That’s why it was noteworthy and a bold move forward when Mayor Bowser and DC Water’s General Manager invited WIN to be a part to DC’s Green Jobs announcement on May 20th. I represented WIN, joined by CEO and General Manager of DC Water George Hawkins, Environmental Protection Agency Regional Administrator Shawn Garvin, and U.S. Assistant Attorney General John Cruden to announce DC’s local job initiative with DC Water and to sign proposed modifications to the Memorandum of Agreement (MOA) to include green infrastructure (GI) investments and jobs in the District. If WIN had not demanded jobs be a part of the MOA, then my seat next to the Mayor would have probably been reserved for an environmentalist and jobs for DC residents would not have been a part of the agenda that day.

Yesterday I sat by @MayorBowser as she unveiled local jobs plan. Thxs @WIN_DC who agitated & pushed for jobs. https://t.co/whSg2eeVg1

The MOA established a goal that 51% of new jobs created to implement GI be filled by District residents. In addition, the autonomous DC Water will provide accountability by reporting on all employment opportunities created as a result of the GI and disseminate the information to the District and partner associations.

The Mayor, DC Water and our federal government officials from the EPA and DOJ have chosen to address two monumental challenges of our time—storm water pollution and job creation. It took a group of clergy and committed community members to demand city officials look at the untapped opportunities in our residents and rivers. It took a group of ordinary citizens to tend to the least of these and to breathe life into the Dead Zones of our rivers and communities.