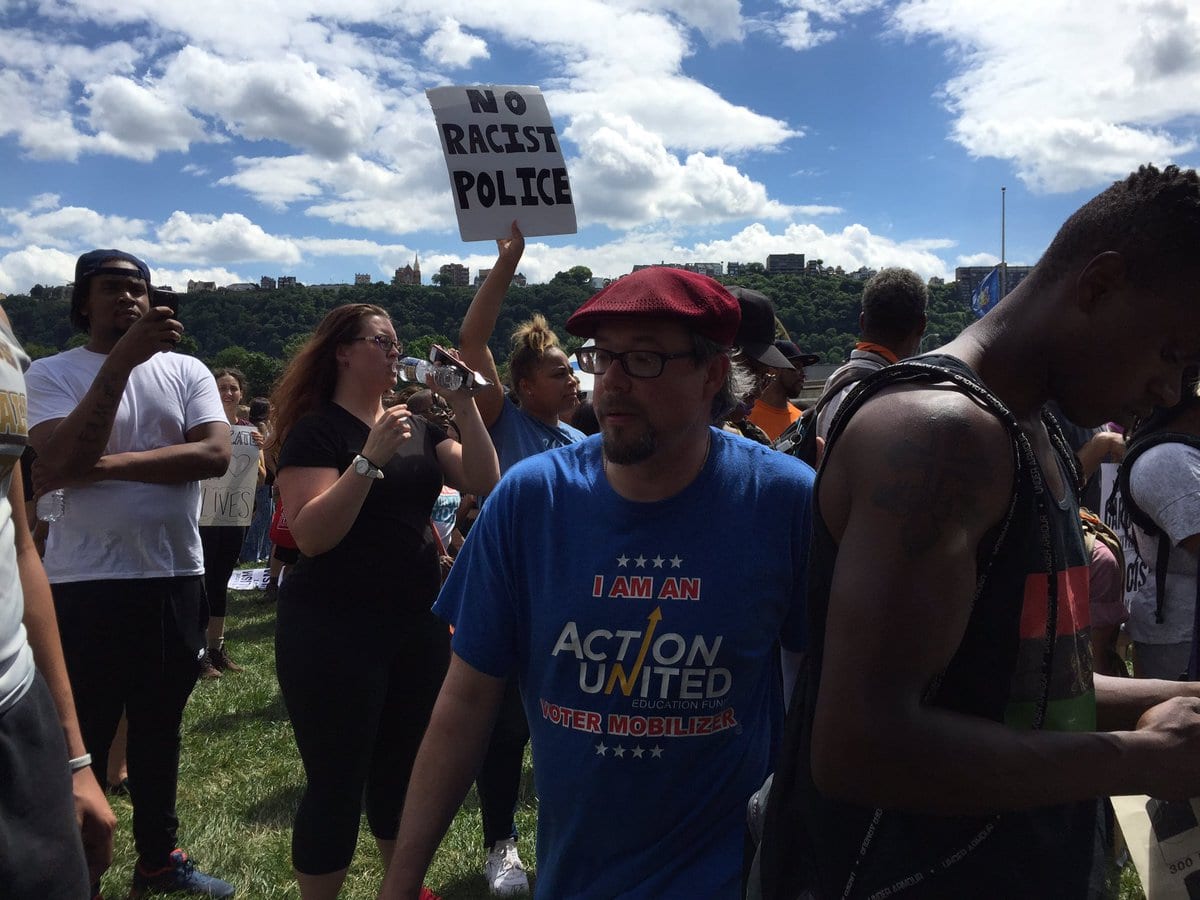 Comic W. Kamau Bell: We Are Living In The ‘Most Racial America’

PITTSBURGH – Police have one standard for black people and another for white people – and as proof, comic W. Kamau Bell played at his show Friday a short video of Beaverton, Oregon police officers trying to subdue a white teen high on mushrooms.

The crowd watched, some mouths agape, as a scrum of officers took turns scuffling with the teen. At one point, the teen grabbed and fired an officer’s gun. In his jail booking photo, he has a bruise on his cheek.

“I watch that every time another black person gets killed by a police officer,” said Bell, host of CNN’s United Shades of America. “By the end, I’m usually laughing and crying at the same time.”

“They (the officers) saved his life – were determined to save his life … That’s racism right there.”

“Ending Racism in About an Hour” is Bell’s sober social commentary leavened with biting humor on racial identity, privilege, racism in the media and his interracial family. His audience Friday were attendees at the People’s Convention, a two-day convening of progressive organizations around the country, hosted by the Center for Popular Democracy.

Bell, who serves as the ACLU’s ambassador of racial justice, is one in a growing list of woke entertainers – Beyoncé, Jesse Williams and Kendrick Lamar among them – who unapologetically declare that #BlackLivesMatter.

He couldn’t have found a more like-minded audience. An end to police brutality was just one of several issues – such as environmental justice, immigration reform, good jobs for all and restoration of voting rights – that centered the 1,600 attendees’ public policy agenda.

Because Bell’s shows are as current as they are pointed, of course he had something to say about the police killings last week of two black men.

“Philando Castile, who died, who was killed in Minneapolis,” Bell said, before correcting himself, “murdered, murdered – and Alton Sterling who was murdered in Baton Rouge, their lives matter to us, even if we don’t know those two people.”

Bell doesn’t couch his comments by bothering to point out that not all white people are unmoved by the violence against black bodies. After all, he warns at the start he’s not there to make you comfortable.

But Bell suggests that the path through the discomfort – such as white people’s angst about #BlackLivesMatter – could lead to racial justice.

“White people on the left can’t handle it. So they started doing this – #AllLivesMatter,” he said.
“That’s not a thing, that’s not even a Beatles song… Nobody ever said #AllLivesMatter until #BlackLivesMatter showed up.”

Then Bell stepped to the other side of the political aisle. “The people on the right, they go one step further. They go #WhiteLivesMatter,” Bell said.

“That one never trends. You know why? Because it’s like saying, ‘Water is wet.’”

Here you could insert a mic drop, but Bell wasn’t done. Not by a long shot.

His hour-long show is as much stand-up as PowerPoint presentation, full of statistics and data and polls and even tweets that prove that “we’re in a most racial America,” not a post-racial America.

While Iggy Azalea got suspended from Twitter for offensive remarks, no such censure fell on Walsh, who threatened the president. “He’s still on Twitter right now,” Bell said. “White privilege.”