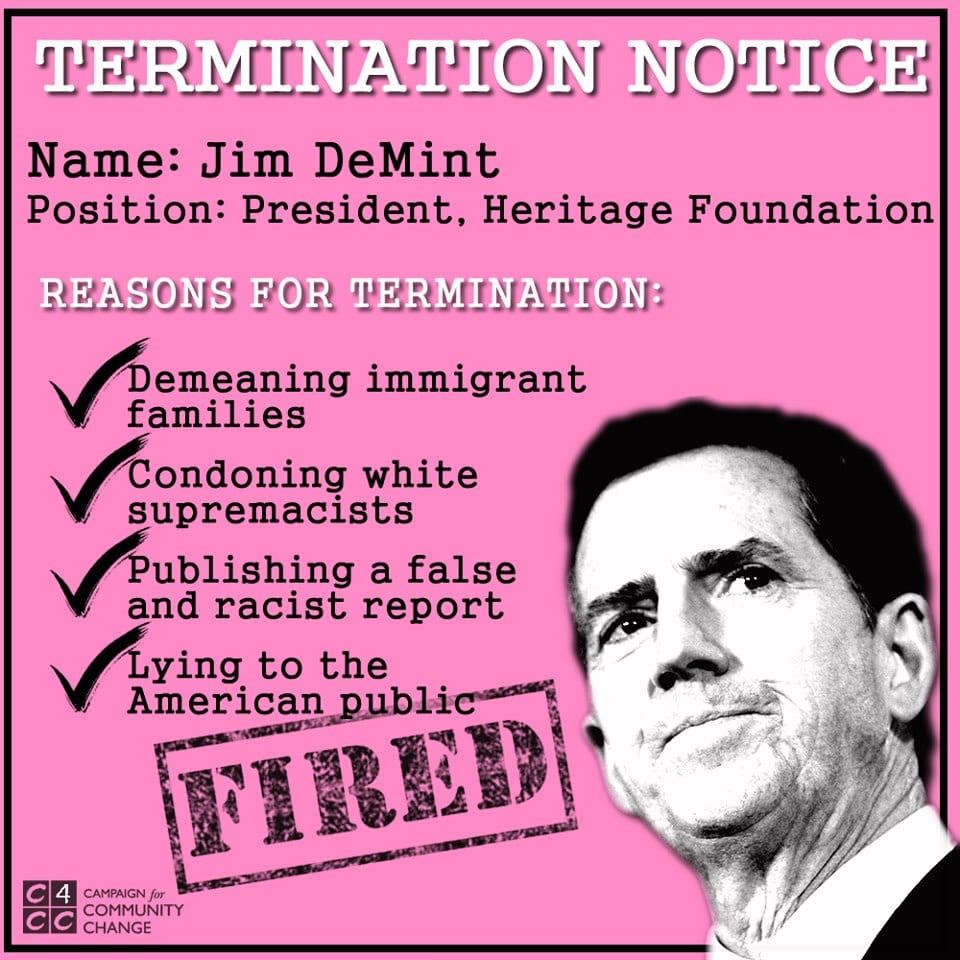 Demanding Accountability from The Heritage Foundation

Last week, The Heritage Foundation released a faulty, anti-immigrant economic “study” that was denounced even within the conservative community. Today, immigrant families will deliver thousands of pink slips to Heritage president and former senator Jim DeMint, demanding that he be held accountable for the bigoted report and resign.

Late Friday afternoon, one of the co-authors of the report, Jason Richwine, quietly resigned from The Heritage Foundation after it surfaced that he had written a highly racist dissertation in 2009 on the low IQ’s of Hispanic immigrants as compared to white Americans.

Community Change for Community Change’s Executive Director Deepak Bhargava said this resignation, which took place “in the cover of darkness, without fully owning up to the reprehensible nature of the views,” wasn’t enough.  “This issue isn’t really that he was fired; the issue is that he was hired knowingly by Heritage with these views way out of the mainstream by the pillar institution of modern Conservatism in America,” Bhargava said on MSNBC’s All in with Chris Hayes on Friday.

The Heritage Foundation should take responsibility for embracing a report written by this extremist, and it is Jim DeMint who should be held accountable. Which is why today at 12pm, immigrant families and activists will be delivering thousands of pink slips to The Heritage Foundation building (214 Massachusetts Ave. NE, Washington, 20002) calling for Jim DeMint’s resignation.

It is our obligation to demand accountability.  In the words of Kica Matos, Director of Immigrant Rights and Racial Justice at Community Change for Community Change, “We cannot stand by and allow our country’s ugly history of racism and injustice to repeat itself.”