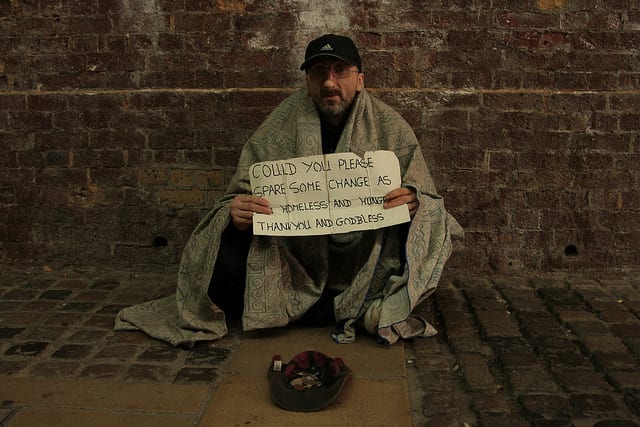 For The Homeless, Getting Through The Holidays Is The Toughest Season

You can’t enter the Interfaith Community Shelter of Santa Fe, New Mexico with plans to spend the night unless you undergo a pat down.

Empty your pockets. Stretch your arms out. Lift our shirt and let security see inside your waistband.

Yes. It’s mandatory. Some of the homeless spending the night at the shelter acknowledge that it’s a necessary security precaution, but many still resent it. They grumble that it’s humiliating, disheartening, and invasive. “It makes me feel like I’m a criminal” is a common refrain.

The procedure will not change on any night of the year. It may be especially disheartening on nights that are about sharing good spirits and tidings. A night like Thanksgiving. This year I spent Thanksgiving night at the Interfaith Community Shelter.

The shelter served a traditional Thanksgiving meal. The shelter guests admit they’re “cold” and ‘tired” so they devour the meal in between muttered comments. “Pretty good.” Most barely say a word – before or after eating.

A man in stained, baggy overalls and an unclean shirt studies his plate with a terrifyingly fixed stare.

Then he glares at me – a visiting journalist. Have I upset him?

He probably thinks that because he hasn’t seen me before I must be a “first timer” at the shelter, so he blurts, “The food’s not bad. But wait till you have turkey, cranberry sauce and stuffing every day for the next two months. Happy Thanksgiving.”

Is he ungrateful? Is he one of the stereotypically “freeloading” homeless? He’s sarcastic—yes—but I suspect by his monotone intonation, and by his hunched, defeated shoulders that his cynical wit camouflages his state of severe depression. He may suffer clinical depression, or a myriad other psychological conditions common in those with no homes.

Nobody could confuse the shelter for anything else than a place to spend a night inside – where night guests are invited inside at 7 p.m., and they’re reminded at 9:45 p.m. that “If you go out, you can’t come back again,” because the shelter locks down, and lights go out at 10 p.m.

The only spirit of the holiday is on a wall behind the large communal dining table. There’s a poster board where guests have voluntarily scribbled thankful appreciations.

The poster board is filled with mostly traditional thanks for friends, family, and life. But, looking carefully, I see that somebody resentfully scribbled, “Nothing and nobody cares.”

Frustration is inevitable. The shelter guests feel simultaneously appreciative, and burdened by knowing that they’re victims. They will be victimized throughout the winter season by snow, rain, and despite tonight’s Thanksgiving meal, they will often be victimized by hunger.

They’re frustrated because many of their problems could be ameliorated, if society focused on the reasons why homelessness exists rather than stereotypes that absolve us of a feeling of guilt or responsibility.

Homelessness is a result of a lack of social resources.

These include a lack of resources for individuals with addiction issues, and the mentally ill who have lost control over their lives. The problem can’t be explained away by conveniently pigeonholing all of the homeless within those categories, however.

The primary reason for the sharp rise in homelessness over the past twenty years has been the dramatic increase in rental costs, and the shortage of affordable housing.

Of the estimated 564,708 homeless persons in America, many are children and many are adults who fell into homelessness because their earnings couldn’t keep pace with exorbitantly rising rental costs.

I continued visiting the Interfaith Shelter throughout early December. The weather was turning colder. Christmas time at the shelter is the season of worry about the deadly threat of hypothermia. The shelter was crowded every night. There’s also a much higher incidence of coughing, illnesses, and the flu.

I met several shelter residents who decidedly insisted they didn’t belong in the “mentally ill” or “addicted” categories. They became homeless, basically, because they were poor. I met – for example – Cindy, a late-fiftyish woman who had a long history of working as a waitress. A year ago, she was living in one of those fly-by night motels that have become an increasingly common option for poor people who can’t pay rental deposits. Cindy subsequently spent three months living in her car. The cold winter nights convinced her to sleep at the Interfaith.

She was having second thoughts, even here, however. Yes, she appreciated the warmth. But the coughing – the wheezing – troubled her. Some nights Cindy worried about sharing the bunk-bedrooms with so many sickly roommates. She couldn’t afford to catch the flu herself. Which was the better alternative? Risking freezing in her car? Or risking catching pneumonia?

“The main thing you need to know about the shelter is this – nobody is here because they want to be here. Everybody who is here has to be here Just like me,” she says.

Cindy says she will try to stick it out at the shelter through the winter, in particular because case workers at the Interfaith are helping her. The case workers tell her that realistically at least a year will go by before she might land an affordable housing unit.

Though Cindy finishes every conversation by saying “Merry Christmas” or “Have a happy new year” the truth is that Cindy faces limited options this coming year. It’s the truth for all the homeless. Its reality traps them in a situation of one anxiety after another, or close to constant state of helplessness and fear. Society needs to respond by making a Christmas commitment to funding homeless shelters, social services and housing programs, and educating ourselves that homelessness has root causes that are remediable.

This article originally appeared on The HuffPost.

Out of Homelessness, A Mom Turns Advocate

Originally published on Rooflines, a Shelterforce blog. Jenean F. and her husband worked hard to achieve the increasingly elusive American…

I Lived On $6 A Day With A 6-year-old And A Baby On The Way. It Was Extreme Poverty.

Originally published on The Guardian.  It didn’t take me long to go from financial stability to fearing homelessness. In January…