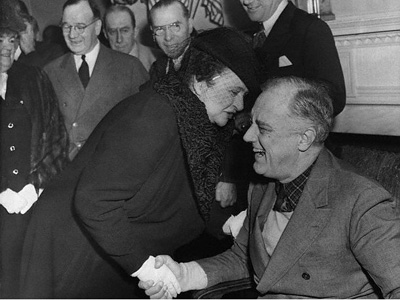 Frances Perkins, former Secretary of Labor and first woman to hold a Presidential cabinet appointment, began her career fighting poverty in some of the most impoverished communities in New York and Philadelphia. Perkins was known for her determination, boldness, and ability to find common ground between people with wildly different viewpoints.

One of Perkins’ first jobs was investigating the living and working conditions of some of Philadelphia’s poorest residents. In interviews, she recalls being sent to investigate worker boarding houses that housed young garment factory workers. She found that she had a lot in common with the women she interviewed. She remarked on their attitude – one that’s also vital to organizing – “[They] don’t sit around and pity themselves. They were up and going and trying to get somewhere.”

In 1909, Perkins and other organizers appealed to wealthy New York women to close their accounts with stores that treated their workers poorly or supported factories with bad working conditions. They were able to build such support among women across socioeconomic lines that when the female factory workers were beaten and arrested for going out on strike, Perkins and other organizers were able to mobilize wealthier women to post bail for them and join the picket line.

“One person told another person, and they all got mad. People who didn’t belong to the union walked out,” she said, “It was a completely new sight to New York to see quite young girls rushing out of these factories screaming and waving their hats and their banners – parading up and down the street screaming to everybody, “Come out you scab. Come out you scab,” shouting up to the women still at work in another loft. Then they’d get mad and they’d come pouring out.”

Solidarity allowed the garment workers to ultimately win their strike, get improved working conditions and pay, and union recognition.

Perkins went on to become President Franklin Delano Roosevelt’s Secretary of Labor, where she used her determination, boldness, and ability to find common ground to end child labor, create the minimum wage, cap maximum hours for the work week, and create Social Security.

Community Change is proud to support a new generation of determined, bold women that are uniting people in the fight to end poverty.

Interview material is from Reminiscences of Frances Perkins (1951-55), p. 27, 32, 48, 49 in the Oral History Research Office Collection of the Columbia University Libraries (OHRO/CUL)