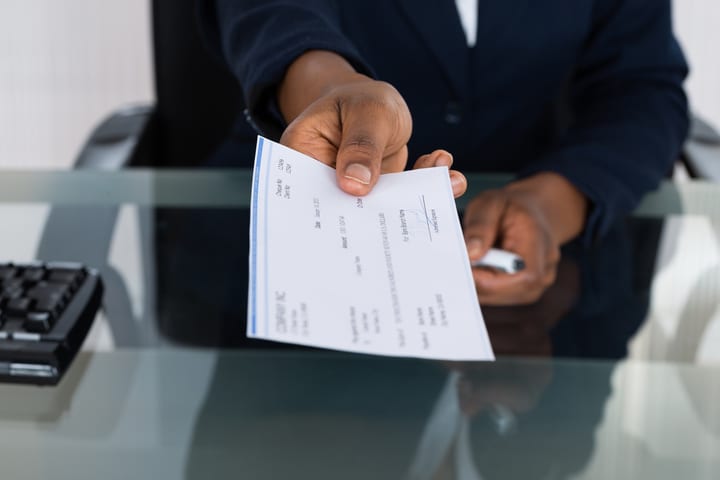 I know at a deep level that my family lived paycheck to paycheck. A check comes in. We pay our bills. We have no savings to speak of. But it is easy to ignore that reality when the checks post regularly.

When my partner left his military job this summer and took a new job, we had to move from a military base to a new house that ate up all the reserve money we had. We had no extra buffer.

But in a mix-up, his new employer mailed his first check and did not deposit it into our bank account. Within hours, we felt the impact of the missing money. Automatic debits for bills reached our bank during the wee morning hours, which created multiple substantial fees for insufficient funds. By the end of that first day, we were hundreds of dollars in the red in fees.

At first, his employer told us the check was in the mail, and it might take a few days to arrive. I frantically called our local post office in an attempt to track down the check before postal workers could forward it to our new address and create yet another delay. I enlisted the help of everyone from our previous carrier up to the postmaster. But they couldn’t find the check.

Several inquiries to the employer’s equivalent of accounts payable only made things more frustrating with their lack of empathy and scripted responses. No one had answers but insisted we remain patient while we finagled trying to feed our family.

For days, I called the bank and checked online only to see our account increase in the negative. We had to use what cash we had on hand sparingly. I had to be extra careful at the grocery store, only buying essentials, none of the extras my two children had grown used to. We had to say no to school pictures and the upcoming book fair.

In addition to daily living expenses for four people in our household, many of our costs are health care related for my young son who has a disability. Still, the most difficult part was having to explain to my children why things had so suddenly changed, why snacks were missing from the pantry or why we couldn’t buy the clothes needed for a new school year. We ate a little less even as I assured my children our situation was only temporary.

When I was able to speak with a real person or leave a voicemail at the company, I asked, “What would you do if this happened to you? Can you afford to miss a paycheck?” I never received a response to my question or a solution to my problem. Not even an “I’m sorry.”

When the second paycheck posted to our bank account, nearly a month after my partner had been working there, he and I let out an audible sigh. It was such a relief although it couldn’t undo the damage already done. Once we paid the hundreds of dollars in fees and we paid the most urgent bills, we were back in the red again looking to the next two weeks. And the cycle continued.

As grateful as we were when the missing check finally showed up almost six weeks later, the damage had been done and our path seemed irreversible.

I never gave much thought to how missing one paycheck could have such dire and long lasting effects on a family. We were lucky to have some ability to bounce back because the checks are steady again. But this uncertainty and stress is a weekly reality for so many families, those in positions of authority need to imagine themselves in these shoes. I guarantee that if they walk a week without money, it will surely change their stride.

This article originally appeared on The HuffPost.

Memphis Sanitation Workers, on MLK Legacy and the Road to Dignity

SNAP works and so should Congress

WASHINGTON D.C.—  Community Change hosted a partners and leaders convening to discuss strategies and to develop collective actions opposing the…

Stephanie Land reviews SMILF from the perspective of a single mom who’s been there...

I Went from Being Homeless to a Full-Time Writer. Trump Wants to End the Programs That Got Me Here.

Six years ago, I lived with my then 3-year-old daughter, Mia, in a studio apartment. During the day I worked…

Like the rest of the country, Gary, Indiana, is wrestling with what was, what is, and what may come...