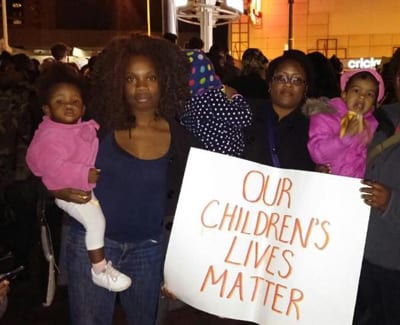 I didn’t cry Monday night.  I turned off Prosecutor Bob McCulloch’s press conference after only a few minutes.  I raged a bit with my husband and on social media, then I pulled it together and sat down to watch Curious George with my daughter.  Because that is what it means to be Black in America – becoming a master at compartmentalizing grief and trauma in order to simply live.

I didn’t cry until Tuesday.  I came across a video of Michael Brown Jr.’s mother, Leslie McSpadden, addressing a crowd of protestors after learning that Darren Wilson, who had gunned down her 18-year-old son in the street 108 days prior, would not even face a trial. “Everybody wants me to be calm,” she shouted.  “Do they know what those bullets did to my son?”

I thought of my own son.  Only a few years younger than 12-year-old Tamir Rice, who was shot and killed on a playground by Cleveland police only days ago.  Brown, and tall for his age with a head full of wild locks, I wonder what fate lies ahead of my son.

Or my baby girl. She’s barely a year old now, but in the blink of an eye, she will be the same age as Aiyana Stanley-Jones, who was killed as she slept by a Detroit police officer.

Who will protect them from “nervous” cops like the one that shot and killed Akai Gurley in Brooklyn last week, or predators like Daniel Holtzclaw, who used his authority to sexually assault at least eight Black women in Oklahoma?

Afraid, grieving and angry, I reached out to other families who would be attending a Ferguson solidarity gathering here in Atlanta.  I packed up my children and went to Underground Atlanta.

If racism in America is an open wound, then Bob McCulloch’s non-indictment announcement was salt poured directly onto it.  But we have become accustomed to the pouring of salt into that wound.  The night’s emcee, Southerners on New Ground Campaign Co-coordinator Mary Hooks, reminded the crowd that state violence does not just look like police violence.  She invited the crowd to name state violence and there were no shortage of examples.  Mass incarceration.  Salt.  Water shutoffs in Detroit.  Salt.  School Closures in Chicago.  Salt.  The razing of entire communities to make way for a new football stadium here in Atlanta.  More salt.

But we spent four hours together in the cold on a Tuesday evening, beginning to heal that wound, and building and strategizing such that once it is closed, it would never be reopened.

I do not know exactly what happened late into the night, but I stand with the young people who are mobilized to action here and around the country.  One of the organizers of last night’s action, Aurielle Marie of #Itsbiggerthanyou, challenged the crowd, “What are you willing to sacrifice for this?”