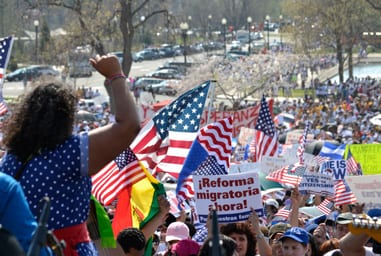 The Day the Invisible Become Visible

The best description I’ve heard of why May 1st plays such a significant role in the immigrant rights movement comes from Angelica Salas, the Executive Director of the Coalition for Humane Immigrant Rights of Los Angeles (CHIRLA).

Salas said May 1st is “the day the invisible become visible.” The invisible being the millions of undocumented immigrants in this country.

From Birmingham to Los Angeles, Milwaukee to Las Vegas, Chicago to New York, these large-scale events in every corner of the country will create a splash of media attention, raising the voices of the people and bringing these important issues to the forefront of national discourse.

Likewise, earlier this month when an estimated 100,000 people showed up at the Capitol to rally for immigration reform with a pathway to citizenship, we were reminded of the power of the people and the palpable public support for immigration reform, amplified by widespread coverage from major news outlets.

Less noticeable, however, are many of the events that take place each day on a local level to effect change. Though they may not get national media attention, organizations around the country coordinate actions at the offices of their local and state representatives, phone calls and letters to Congressmen, vigils, sit-ins, petitions and more.  Every smaller effort is a part of the larger movement, and it is by building upon the momentum of these local actions that make nationwide events like today’s rallies and marches possible.