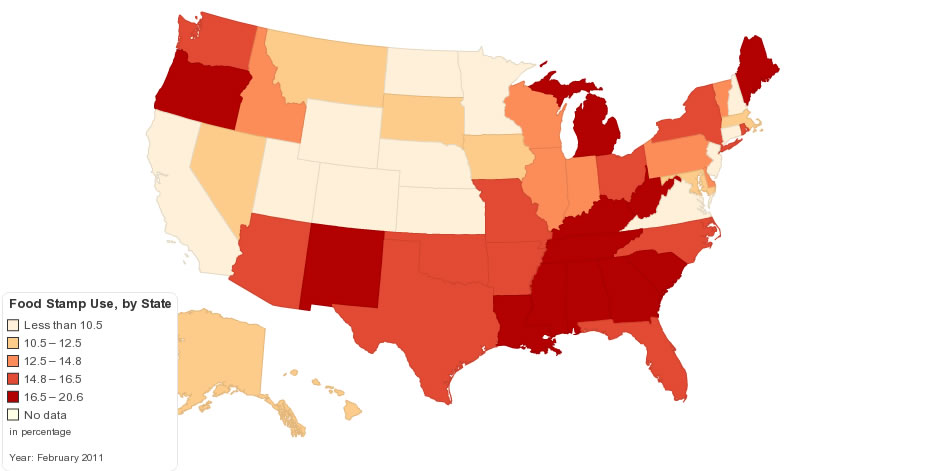 If you’re reading this article, you’re probably already aware that the House of Representatives voted to cut the Supplemental Nutrition Assistance Program (SNAP) by $39 billion. The bill didn’t decrease funding for SNAP per se; rather, the bill raised the eligibility requirements for people already on the program, thus saving money in the federal budget. I’m not going to write about why this was an objectively terrible idea, or as my friend characterized it in a Facebook status, “somewhere on the spectrum between misguided and just plain evil,” but I do want to shed light on an overlooked irony in the battle of the food stamps.

But first, let’s observe the obvious. Republican Congressmen typically oppose the expansion of social programs and favor spending cuts for programs like Medicare, Medicaid and SNAP. “Red” states, geographically situated mostly in the southern, southwestern and Midwestern/Appalachian United States, have heavily contributed to the election of 233 Republicans to the House of Representatives.

It would stand to reason that the majority (or at least a plurality) of voters in districts represented by Republicans actually voted for those Republicans in an election. We should also note that the 15 percent of Americans on food stamps constitutes a considerable portion of the electorate.

Now, take a look at the map below, which shows the percentage of the population per state that benefits from the food stamp program. A third grader could look at that map and tell you that the highest concentrations of people on food stamps are overwhelmingly in the southern, southwestern and Midwestern/Appalachian United States, states that are represented largely by Republicans.

In Thomas Frank’s book “What’s the Matter with Kansas,” a groundbreaking case study on the tendency of Kansans to vote for fiscally conservative Republican candidates who would inevitably enact laws that conflict with their best economic interests, the voters chose candidates whose social conservatism mirrored their own, despite those candidates’ stances on jobs and the economy. Voters identified most with—and ultimately voted for—the candidates’ socially conservative platform, even though, once elected, the politicians only focused on their fiscal platform and largely ignored the social stuff that had won them their seat.

By this logic, food stamp recipients in the southern, southwestern and Midwestern/Appalachian regions—of which there are a disproportionate amount—care more about social issues than about fiscal issues (like, surprise, food stamps).

Here’s where it gets really interesting. Because SNAP could easily be categorized by candidates as a social program and thus a “social issue,” the voters in these districts, even the ones on food stamps, may have known they were voting for a candidate who favored cuts to the food stamp program. In this case, the rational actor model is not only inaccurate—it’s entirely backwards.

Why would a person benefiting from food stamps vote for a candidate who has openly opposed them? Shouldn’t we reasonably expect voters to put “food security” toward the top of their priority list when evaluating candidates? To give a practical example, why in the world does Republican Congressman (and SNAP opponent) Tim Huelskamp (KS-01) represent a district in which 21,109 households receive food stamps, 56 percent of which have children under 18?

This is abominable. And  Rep. Huelskamp’s legislative style, which can really only be described as “stubbornness,” was lauded by constituents earlier this year at a town hall. These voters knew what they were voting for. Unfortunately, a large fraction of the district’s population will suffer as a result.

Instead of blaming people, instead of voting down every piece of legislation that crosses your path regardless of content, can we instead have a serious discussion—in Congress or elsewhere—about what we’re doing about poverty and hunger?

Yes, our country faces major debates over the budget and the government shutdown, among plenty of other issues—but the millions of Americans living in poverty and hunger don’t have the privilege of simply biding their time, debating spending and playing politics until the clock runs out, and recessing until next year.

Americans in poverty live poverty 24 hours a day, 7 days a week, 365 days a year. This is one of our country’s most pressing issues. And the one time the House decides to bring it up (albeit tangentially), Republicans voted to condemn millions more Americans to hunger and poverty, most of whom reside in their districts.

I’ve argued here that this issue is saturated with irony and paradoxes and backwards logic that I’ll never understand—but me sitting here relaying an irony does not help reveal an answer. Ultimately, only Congress can devise an adequate solution, so I have my sights set on the farm bill conference committee that will decide the fate of the food stamp program.

If we really want to save food stamps, we have to take action. We must coordinate and organize and, unified, tell the House conferees to renew the existing food stamp provisions and reinstate that $39 billion they tried to cut. We only have a week or so to mobilize, but this could be a defining week of action for the 3.8 million Americans who will see their benefits cut if House Republicans get their way.

Let’s not let the House Republicans get their way. Let’s do something. Let’s find a way to amplify the voices of the 47 million Americans on food stamps to tell the conference committee to save SNAP. Because—let’s face it—if we don’t do it ourselves, it might not get done.