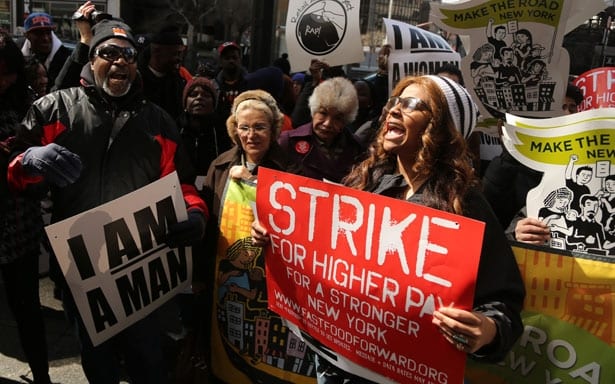 Last month, fast food workers went on strike in 100 cities across the country. The workers are fighting for a $15 an hour wage and the right to organize into unions. A $15 an hour wage would allow workers to better provide for themselves and their families and will help them to rely less on public assistance. This year there were new strike locations in Charleston, South Carolina; Providence, Rhode Island; and Pittsburgh, Pennsylvania.

For many workers the strike was about more than just securing higher wagers, it was about inspiring young people to stand up and fight for what they believe in:

Some workers Mary Coleman’s age might consider protesting a job for younger people, but she felt compelled to join the strikes, if only to show apathetic youth that change is possible.

The fight for higher wages is an uphill battle for many fast food workers, as many fast food locations are run by franchisees, which takes the issue of worker pay out of the hands of the companies.

With the chief executives of McDonald’s and Yum Brands among the highest paid corporate leaders, there is no reason why their workers should have to live off $8.25, barely being able to survive. There is no excuse for McDonald’s management telling their workers that they should apply for public assistance instead of simply increasing their wages so they won’t have to. Community Change stands with the fast food strikers in their fight for fair wages.