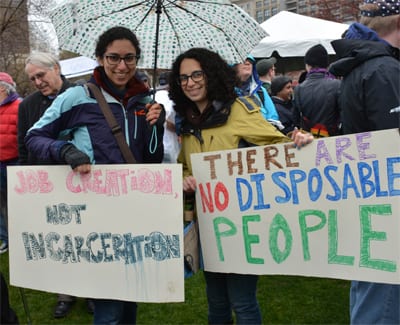 Getting our priorities straight on mass incarceration and perpetuated poverty

Connection between mass incarceration and perpetuated poverty, why it’s bad not only for individuals but also for communities

Did you know that the U.S. imprisons more of its citizens than any other country in the world, with over 2 million people behind bars? And that 1 in 4 adults in the U.S. have arrests or conviction history that make it difficult to find a job?

Our current legal system makes it almost impossible for formerly incarcerated people to find work after they have served time, and they are also disqualified from receiving student loans, public housing, and SNAP benefits. These conditions essentially rob them of any hope of economic opportunity and only serve to promote economic hardship. It seems like any effort to take a step in the right direction is denied since existing policy excludes formerly incarcerated people from the opportunities that can help them thrive.

These people receive their punishment by serving time in prison. Why must they continue to be punished after they are released?

The issue of mass incarceration is one that should seriously make us question: when are we going to get our priorities straight? As of now, states spend significantly more on prisoners than they do on students, with several states spending double or triple the amount to house a prisoner each year than what they spend on a student during the course of a school year. This blatantly shows that government spending is more invested in punishment than potential.

The present-day U.S. prison system is detrimental not only to the people who must endure it firsthand. It is also harmful for families, communities, and ultimately the entire country. Learn more about the devastating effects of mass incarceration here.

A Guide for Workers with Conviction and Arrest Histories