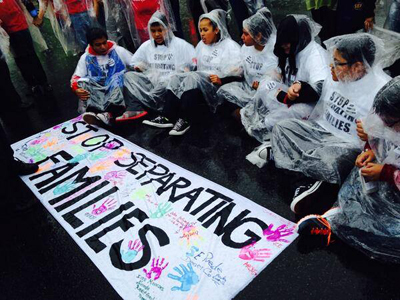 Meet these Five Youth Heroes Who Made History Today

Today, a group of ten youth activists, seven of whom are minors, led a group of family members to the middle of 1st & Independence in front of the Capitol Building to block traffic and face arrest.

These kids, many of them missing a mother or a father, many of them undocumented themselves, some of them as young as 11 years old, took these bold steps because they are sick and tired of being ignored by lawmakers. They follow a long history of child activists in this country, carrying on the torch of justice from other largely youth-led movements such as the civil rights movement.

These courageous young activists came from their homes across the country to take a stand for immigration reform, knowing full-well the risk involved. Many of them, coming from families and communities that have been devastated by deportations, feel that they have no more options left. Others are here to stand up  for the children who have not yet felt the pain of separation, and whose families could be spared with the passage of immigration reform legislation.

These are five of the powerful young leaders from today’s action, speaking in their own words about why they decided to join the civil disobedience today.