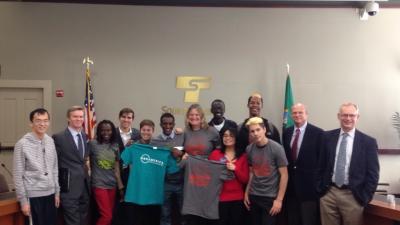 Reliable access to transportation is the single most important factor in escaping poverty. This issue agitated and resonated with community members in Des Moines, Washington when they heard that light rail was coming to their community. OneAmerica, Highline College students, Transportation Choices Coalition, Futurewise and other organizations came together to launch a campaign for Transit Equity in the Federal Way Link Extension project. Students at Highline College and community members near the planned “Highline Station” organized to fight for a station that was safe, provided excellent access to Highline College and surrounding neighborhoods, and made sure that student, immigrant and low-income communities were centered in the Sound Transit decision-making process.

In the end, we won a light rail station that the students helped envision:
• The Highline Station will have safe pedestrian access to Highline College
• Students will see the expansion of 236th Ln, creating a “grand opening” to this community educational hub
• Students insisted on maintaining critical bus service to the college.

…and most importantly, students convinced Sound Transit to open up the decision-making process to those most affected by the decisions made. This type of public participation will be the new norm for Sound Transit projects going forward.

For OneAmerica and our allies, transit is about access to opportunity, but that benefit is often overshadowed by cost. Students and community members envisioned light rail stretching along SR-99 from the Angle Lake station in Seatac south to Highline College. It would carry riders from their homes to small, immigrant-owned businesses and make it easier for students to travel between class, work, and errands. The path along SR-99 would maximize opportunities for housing and businesses to grow up around the light rail. However, the Sound Transit board ruled against the community in favor of a cheaper but less fruitful option along I-5.

But the coalition for transit equity did not give up. Unsatisfied with the lack of consideration for the community in the rail alignment decision, OneAmerica worked with Sound Transit board and staff to create a space for stakeholders like Highline students to choose a location for the Highline Station. Highline students lobbied key targets in the cities and County Council, organized a powerful rally that attracted 75 students, faculty, and staff, canvassed local businesses, and testified at multiple Sound Transit Board meetings. They drove the campaign forward and presented their vision for the Highline Station to the board.

Describing the collaborative process, current leader of Highline’s Student Legislative Action Committee expressed, “When I first got involved the west 99 alignment felt like an impossible uphill battle, but by the final stakeholder meeting I felt as if both options were equally considered and that student voices had been heard loud and clear! It was also quite encouraging to see so many different factions with opposing views working together towards a common goal.”

Current Speaker of the Caucus of the Associated Students of Highline College, Abdul Aziz Bah, commented, “as I got more involved it felt more than that to me, I realized even the community around Highline who were also primary users of this train were not represented . So I felt it was also an opportunity to voice out the need of this community.

Students played key roles in developing an action to call the attention of Sound Transit, that people who use their services, and the communities that they serve are the key constituents and stakeholders. One rally, co-organized by OneAmerica organizer Carly Brook and Highline Students clearly demonstrated the power that OneAmerica and students were building in the community through the campaign. Chants in the crowd included, “West [of SR-99] is Best!” and “Where do we want the station? Highline!” “Which side? West Side!” and signs read “Highline Station for Highline Students”, “What about us, Des Moines”, and “No Student Road Kill”.

The rally showed that Highline is a community of low income students and immigrants; a community that deserves access to quality transit. The rally also taught us that building student power and coming together to put public pressure on key targets has results. The Sound Transit staff, working tirelessly on this entire process, definitely heard the student voices.

One Highline student, Ruth Krizan, noted, “We would not have our voices heard if we did not stay connected with the process and be there when we needed to be there. I learned that if we would not step up and speak out our concerns to Sound Transit, the Highline Station would not have been so accessible and safe. By bringing all the stakeholders together the conversation included voices that would not have been heard otherwise. We made a difference. I was happy to hear that even Sound Transit was going to use our experience as a model for future stations!”

Dr. Jonathan Brown, Director of Highline College’s Center for Leadership and Service summarized it well: “This initiative proved to our campus that students can successfully stay focused and effective as activists, even during a changeover in internal leadership and over the course of several years…it was the students of Highline College that reminded the professionals to not forget the human concerns and needs in the provision of regional transportation. I am proud that our Highline representatives were relentless at coming back to the table again and again to remind regional transit planners that there are issues of social justice and equity that need to be considered in the planning of the proposed Highline College Light Rail Station.” He emphasized, “OneAmerica Federal Way Organizers build authentic communities of action, listen carefully to all constituents, and have convinced me that they are servant leaders to the common good. I have been pleased to have OneAmerica as a role-model for all of us at Highline, especially my students.”

Through the Highline Light Rail campaign, OneAmerica learned that deep community engagement and leadership development are essential in ensuring government decisions build better communities. We can’t wait to see what these students do with their energy, their leadership, and their new skills. We’re also looking forward to seeing Sound Transit become part of the communities it serves.