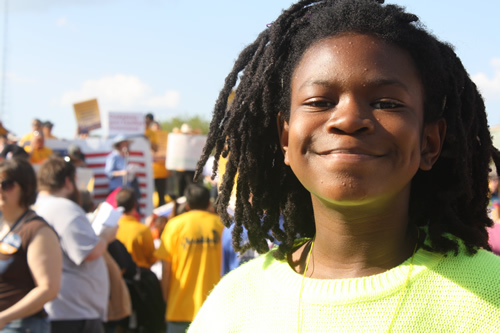 Overcoming the Frustration of Injustice

While reading a recent Salon article, “The real story of the shutdown: 50 years of GOP race-baiting,” I cannot honestly say that I was too shocked. The institution of racism is so engrained in American society that it is hard for many to accept change. African Americans are challenged with many hurdles even in 2013. Yes, there is an African American president, but racism has not left the building; rather, it has just evolved into a new form. During the first term of President Obama, the true feelings of those who were not overly fond of Blacks were made known to the public. Many conservatives, including Rush Limbaugh, believed that President Obama was an “affirmative action candidate,” despite the fact that he graduated Magna Cum Laude from Harvard Law School. Donald Trump questioned his citizenship and the legitimacy of his birth certificate. Along with the other critical assumptions and insults made towards the president, the one that has saddened me the most were the remarks made by Newt Gingrich. Gingrich criticized Obama for the growth in food stamps, calling him “the best food stamp president in American history.”

All of the allegations mentioned above brought me to a rather disheartening epiphany; it does not matter who you are or what you have achieved; even in the 21st century, some people are simply unable to look past skin color.

It is important to state: I am not a person who feels oppressed by my skin color, race, or gender, but I am very cognizant of the odds that are against me. I did not vote for Obama because I believed that those who disliked the idea of a Black man running this country would do everything in their power to ruin his reputation, no matter what his credentials or platform. In fact, I didn’t vote at all because I had lost confidence in our government. I was against the whole capitalist system because it left too many people out, especially poor minorites. Inequality and injustice continued to be a part of society, and as I watched things worsen, I grew increasingly frustrated by the empty promises of politicians. The face of the United States may have changed, but the systematic issues of American society had not, and I was not ready to take part in the human puppet show

Since then, I’ve realized that having such strong apolitical views will not do me any justice. I decided to stop complaining about how unjust this country is and do what I could for those who do not have the voice, the education or the opportunity that I do. With this activist spirit growing inside of me, I knew I wanted to be a part of a greater cause throughout the rest of my life.

Before I left high school, I started doing more research on issues that interested me. The first protest I attended was related to the massive budget cuts on education in New York. These cuts were harming children in low-income neighborhoods the most. It seemed like Mayor Bloomberg did not care that these are the children who depend most on education. But I cared because education means so much to me.  Next, I attended my first march for International Workers Day.  I know so many people who have been exploited at their jobs, and I was inspired to join the cause to fight for their rights.

Now, working as an intern for CCC, I know this is the perfect fight for me. Fighting for those who live in poverty and people who deserve a fair chance at citizenship has further increased my appetite for social justice and change. Interning here allows me to express my views for those who may not have the chance. I can understand how many people may feel that nothing will ever change or get better and how that can lead people to inaction, but I’ve learned that things cannot get better with that kind of passive attitude. In order to enable change to happen, more people should get out and vote, not just for presidential elections but for local elections as well. People need to get involved in their communities by joining local organizations and getting out and fighting for injustices when we see them. We must stand up for one another. Instead of letting frustration take over, we must go out and demand justice for all. Divided we fall, but together we stand tall!

To learn more about institutionalized racism in the United States, check out “The real story of the shutdown: 50 years of GOP race-baiting” by Joan Walsh.