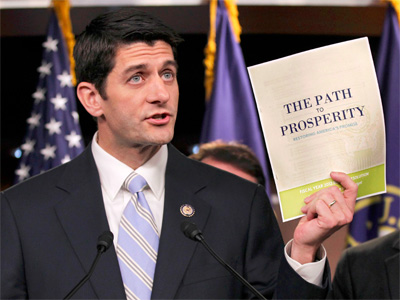 In 1966, the “King of Soul,” James Brown, proclaimed, “It’s a man’s, man’s, man’s world!” And ever since, there hasn’t been a Brown biographer or reality singing competition that has not placed those lyrics front and center in American culture. As an African American woman and a mom, I too have been guilty of grooving to these lyrics that even Rolling Stone called “almost biblically chauvinistic.” But like any good piece of art, it sure imitates life!

Last week in particular, the “Man’s, Man’s, Man’s World” has puffed out its arrogant chest in the form of House Budget Committee Chair Paul Ryan’s (R-Wis.) newly released budget proposal. This proposal included slashing funding for “non-defense discretionary” programs such as the food stamp program, financial aid for students and the Social Security system. What we know is that these programs help to supplement the budgets of women and women-led households.In 2009, 46.3 percent of women-led, one-parent households participated in government assistance programs, compared to 26.5% of single-parent households led by men and just 12.3 percent of two-parent households. Cutting these programs while allowing free-loading corporations to skip out paying their share of taxes serves as yet another example of how women and children are mistreated in our society.

In times like these, I wish that I had a magic wand and could rewrite this Man’s Man’s Man’s mantra that our country and its politicians dance to. My song would be the rallying cry for those I see in my community: resilient women and moms who are barely living, skating on the edges of poverty, whose stories have to be a part of this country’s “big come back” plan.

Women like Telli, a single mom of two barely school-aged children. Telli is a young teacher, newly turned school administrator. She is tirelessly committed to education in an urban school district, yet she is consumed with student loan debt and the expenses of daycare and afterschool care for her children. She is working. She is budgeting. And at the end of the month, she is still trying to figure out how to meet her basic financial obligations. And she is not alone. According to the Shriver Report, 42 million women and 28 million children are in households living from paycheck to paycheck in need of a little assistance that could keep their households from going under.

Like the women in the Shriver Report, Telli and her children just need what any good neighbor would provide: a little help. Politically, this “help” comes in the form of programs like the ones Ryan is proposing we cut: help with food or childcare expenses; help to afford college or increase Social Security benefits for seniors. In defense of his chauvinist budget, Ryan states, “This budget applies the lessons of welfare reform to other federal-aid programs; it takes steps toward reforming these programs to encourage work [emphasis added], to increase economic growth and jobs, and to preserve the safety net.”

The problem, Mr. Ryan, is that we women ARE WORKING! For too long, we have allowed for the stories of women like Telli to be drowned out by the Man’s World policies that stereotype and penalize women, while favoring “good ol’ boy” pats on the back in the form of tax evasion for large corporations.

Women, let’s stand together against the stale, male-dominated thinking that dictates what is politically important! I say it is important that people have employment that can provide a wage that allows you to not only live, but thrive. But until that happens, it is important that our families eat. It is important that our children have the opportunity to access quality education and child care. It is important to feel safe and not threatened by homelessness or basic living expenses. We, as a country can prioritize programs that support women, children and families. We women, as a voting bloc, should not be asking for our collective tax dollars to be allocated to these programs; we should be demanding it.

I challenge you to see Ryan’s budget for what it is: a thinly veiled shot at us and our families. Counteract the shot by doing what we do best: fight to preserve the dignity of our families! In short, Woman Up!

Reed is senior organizer at the Center for Community Change.