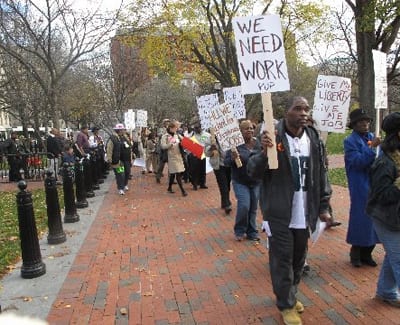 Last week, NPR ran a story about who is poor on TV –and how some television shows depict poor people. Two of those shows were Good Times and The Wire, which both depict African-Americans living in poverty. On Good Times, we see a black family living in a Chicago housing project and, as the theme song says, are “scratchin’ and survivin’.” In The Wire, we see another, darker portrayal of poor urban Blacks, many of whom turn to gangs and drugs. The NPR piece looked at poverty on TV in general, but it is important to look at these portrayals through a racial lens.

Some people could say that Good Times was an example of poor Black people being exploited for laughter. But for many, this was the first time they were seeing an all-Black cast on a night time sitcom. Seeing that portrayal was important, particularly to show creator Norman Lear, who himself grew up during the Great Depression.  In that way, it did what no show had done before—give a glimpse to the experience of some Black people living in poverty. However, while necessary, it still did not tell the full story of the Black experience in America. “Good Times got positive reviews from the Black press; [many] said that it looked at the reality of black life,” Norman Lear said in an interview. “But after about a year and a half, people started to wonder why we weren’t looking at other aspects of Black life.”

In addition to showing how poverty effects youth, The Wire relied on another trope we often see – the bad Black mother. Whether the mother is absent due to drug abuse like in the case of Dukie, or when they are verbally abusing and forcing their child to join a gang and sell drugs in the case of De’Londa Brice. Perhaps there are youth who experienced this in cities like Baltimore, but it was a dangerous portrayal—especially when poor Black women are often painted in mainstream media as bad mothers. We saw this recently in the story of Shanesha Taylor, the woman who left her children in the car while she went to a job interview; and Debra Harrell, who was arrested after leaving her nine-year-old daughter in the nearby park so she could work her shift at McDonald’s. Our own First Lady Michelle Obama was also left making a hard decision—at the White House Summit on Working Families, she recounted the story of having to take her daughter with her on a job interview because she did not have child care. So often mainstream media tells us that Black women in general and working Black women in particular are bad mothers—forced to juggle responsibilities and “putting their kids first.”  It’s no surprise that television shows would tell us the same.

Seeing stories of Black people who did not live in poverty were scarce until the 80s, when The Cosby Show debuted. Cliff and Clair Huxtable were an upper-middle class, college educated family with five children—a powerful image that flew in the face of the Reagan-era myth of welfare queens and crackheads. In fact, the show was originally attended to be about a working class Black family, but Bill Cosby had a better idea:

But before the pilot was shot, Cosby returned to Carsey and Werner with a different idea: His character would be a doctor instead, and the show would be about an upper-class black family rather than a blue-collar one. […] The Huxtable clan grew from six members to seven when a new eldest daughter, Sondra (Sabrina LeBeauf), returned from college, an idea born of Cosby’s desire to show the family having successfully shepherded a child to a higher education. The producers hired Dr. Alvin Poussaint, a noted psychiatrist whose work focuses on the nuances of raising black children, to act as a consultant and give notes on scripts. The writing took shape around these new ideas, and the series found many of its episodes playing with ideas of how being raised by two successful, moneyed parents shaped the children, for better and for worse.

Later, A Different World showed another image of Black youth –this time as students at the fictional Hillman College. It was a direct response to the stereotype that Black youth weren’t interested in learning or going to college.  Telling the story of poor Black people in America like in Good Times were and still are important—but just as important was sending the message that not all Black people live the same way and are not a monolith.

When portraying poverty, class, and race in America on television, representation matters. A recent study found that 82% of African Americans surveyed feel that it is important that Blacks are viewed positively in the media. We can look to TV when it shows the barriers poor people face and makes them agents of their own story. The other key piece to full portrayals of poverty on TV is shared experiences such as child rearing or paying bills. Finally, they should name real things people want like time with their family and a comfortable life. Community Change will continue to fight for policies that will help and not hurt those living in poverty, such as a higher minimum wage and Ban the Box laws. In addition, Community Change has done extensive research on these key principles and the best portrayals have these priniciples intact.  The research confirms that we lack a sustained movement to address economic inequality because “we do not speak in human terms about…barriers and possibilities for those struggling to make ends meet.”  This was written in the context of social movements, but it holds true with TV portrayals of class and poverty as well.

Part of a positive portrayal starts with honest views about what it means to be Black and poor—and not so poor—in America. It also starts with being careful not to exploit the experience of poor Blacks as fodder for laughs.