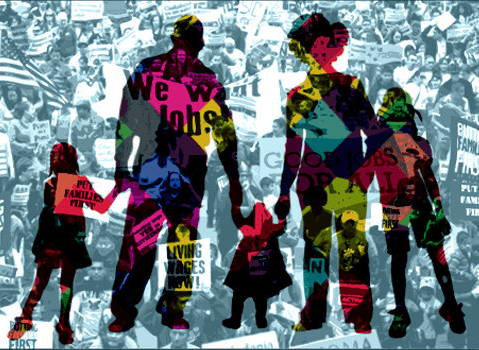 Putting good jobs at top of US policy agenda

Even though she’s worked at the Checkers in Lincoln Park for four years, Mya Hill is still paid only $8.15 an hour – Michigan’s minimum wage. Her fiance, Jonathan, is paid the same amount at a nearby McDonald’s. Between their two fast-food incomes, they can’t afford the basics. And even with supplemental food stamps and Medicaid, they barely have enough to get by and take care of Jonathan Jr., their 2-year-old son.

As for childcare, Mya and Jonathan can’t afford a full-time program on their minimum-wage earnings. Instead, they scramble to find friends or family who can help. Month after month, they struggle to pay the bills and stay afloat.

Mya knows life shouldn’t be this hard for two people who work hard and play by the rules. She believes Americans like her deserve to earn a wage that allows them to sustain a family. That’s why Mya went on strike April 15, joining the largest ever mobilization of underpaid workers – ranging from fast food cooks to adjunct professors. All across the nation, they called for a $15 wage and for the freedom to form unions without retaliation.

There’s a lot of talk these days about income inequality. Mainstream liberals argue in favor of training programs to address the so-called skills deficit and modest increases to the minimum wage. Conservatives promote their own brand of economic opportunity in the form of personal responsibility and trickle-down policies. Both narratives too often blame struggling Americans instead of calling out the reality that the economic rules of this country are getting more and more out of balance.

If you ask Mya what the solution is, her answer is simple: America needs good jobs. And a new movement is building to bring that solution to life by ensuring that our government takes bold action to create good jobs and guarantee decent wages and benefits for all who want to work.

In cities and states throughout the nation, the energy of this movement is winning campaigns to increase minimum wages, allow people to earn paid sick days and paid leave and protect them from wage theft and abusive scheduling practices.

To paraphrase a political campaign of another era, the message people are sending politicians is clear: “It’s Jobs, Stupid.” America should ensure that every person who wants to work has a job and a good standard of living.

You wouldn’t know it from listening to politicians, but Americans stand largely united on this front. We work to support our families. We serve our communities. We believe in America. We want to leave things better for our children. To get there, we have to create good, stable jobs for anyone willing to work – jobs that provide benefits and wages you can sustain a family on and that end racial and gender discrimination.

To put good jobs at the top of the policy agenda, a consensus is emerging around five priorities:

▪ Guaranteeing good wages and benefits. Requiring every job in the United States to meet a minimum standard of quality – in wages, benefits and working conditions – and offers unhindered access to collective representation and a real voice for workers.

▪ Unlocking opportunity in the poorest communities. Investing resources on a large scale to restart the economy in places where racial bias and sustained disinvestment have produced communities of concentrated poverty.

▪ Building a clean energy economy. Using the large-scale investments required for transition to a clean energy future to create millions of good jobs that are accessible to workers of color, women and economically distressed communities.

▪ Taxing concentrated wealth. Funding new investments in job creation, care and economic renewal by taxing those who benefit most from the current economic model – investors, financiers, wealth managers and individuals in the highest income brackets.

This emerging agenda arises from the lived experience of a rapidly growing number of Americans. One-third of Americans – 106 million – live at or within an inch of the Federal Poverty Line and three-quarters survive paycheck to paycheck. Over the past year, more than one-third (36 percent) of Americans say they or someone else in their household reduced meals or cut back on food to save money.

This agenda ultimately transcends policy and politics – it’s about people. It’s about the real difference we can make in Americans’ lives if we create an economy that works for all.

It’s about Mya, Jonathan and Jon Jr. not struggling so hard to make it. It’s about giving all Americans a chance at remarkably better lives.

Mary Kay Henry is the international president of the Service Employees International Union. Deepak Bhargava is the executive director of the Center for Community Change.

Learn more about the Putting Families First: Good Jobs for All campaign at putfamiliesfirst.org

On June 16th, I celebrated my youngest daughter Coraline’s second birthday. While she opened presents, I relished the memory of…

Photo credits to Cameron Parkins.  Originally published on TalkPoverty and The Nation. When my father, aunt, and uncle decided to…

The Class Politics of Decluttering

In a piece published by the New York Times, writing fellow Stephanie Land explores the role that class plays in the…

What Happens When You Can't Afford Self-care

Originally published on Talk Poverty. For the last year, I have been keenly aware of my dire need for two…