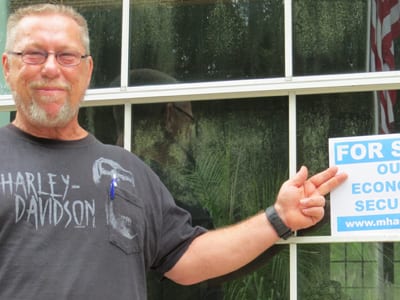 I am responsible for making billionaire Sam Zell rich

I am the reason Sam Zell is rich, but I’m not his stockbroker, and I’m not his business partner. I am one of the hundreds of thousands of people living in one of the 370 manufactured home communities operated by Equity LifeStyles Properties (ELS), where Zell is chairman of the board.

My home and the 140,000 like them are a large part of the reason Zell made his billions. This is the same Zell who recently commented in an interview that this country should be “emulating the one percent” because “the one percent work harder” and “are much bigger factors in all forms of our society.”

My home is also the place where my wife and I sought refuge at a very difficult time in our lives. After working decades for a delivery service company, I was severely injured in a motorcycle accident and was no longer able to work. I had to go on disability.

A year later, my wife Kathy got into a horrific accident. Kathy was driven off I-95 by a tractor trailer and critically injured. Kathy had to learn how to walk again and has undergone 32 surgeries in the last three years. I now feed, clothe and bathe her every day. I do her shopping, and I make sure she takes her medications. After she nursed me back to health, I switched roles with my wife and now act as her day-to-day caregiver.

We moved into our home in Carriage Cove, an ELS-owned community located in Daytona Beach, Florida, shortly thereafter. Carriage Cove seemed like a great option for us. We were low on savings with no future employment prospects, and the property was affordable and offered a sense of community.

At first, living there was worry-free. But since, our experience has soured. ELS used to cover water, sewer and trash pickup as a part of our monthly rent. But ELS took away those services, forced the costs on the homeowners and did nothing to reduce our rent. Our community center is falling into disrepair and has just been inspected due to a large number of safety violations. The longer we live here, the more it’s clear to us that ELS communities are operated by predatory equity schemes designed to make Zell very rich.

The people who live in ELS communities are retired citizens who have worked hard all their lives and just want a chance to live out their golden years in peace.

Take Viki D’Eugenio, a homeowner in an ELS community in Delaware who runs a small business. After living there for two years, Viki was generally happy with the community and ELS until October of 2013 when her home caught fire. Because there were no fire hydrants on the property, firemen were unable to reach her home in time, and Viki had to watch her home burn to the ground. She lost everything. The property managers told her that there was no such thing as hardship exemption on her monthly ground rent, and she would have to pay the remainder of the rent even though she had no home to live in.

Richard Robinson in Farr West, Utah has worked his entire life as a long haul trucker until he was severely injured on the job. No longer able to work, Richard and his wife Sondra moved into an ELS community to save money. After a few months, it became clear to Richard that ELS wasn’t investing in his community. Richard and his community members got together to make ELS fix the sidewalks and driveways and pave the streets so that his community was safe for the seniors that ELS was marketing to. Richard should not have to lobby ELS to do what it should be doing on its own: taking care of its communities.

So to Zell’s theory that the one percent work harder, I ask him to visit some of his ELS communities and see for himself who his tenants are. We worked hard all our lives and we had hoped to enjoy our retirement in a nice community. Our dreams have been shattered.

For more information about Sam Zell, ELS and what people living in ELS communities are doing to fight back, check out this video.