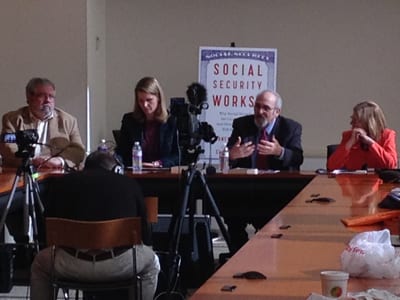 Social Security expansion: Something we can all agree on

Yesterday, Nancy J. Altman and Eric R. Kingson, authors of the new book “Social Security Works! Why Social Security Isn’t Going Broke and How Expanding It Will Help Us All,” joined AFL-CIO Secretary-Treasurer Elizabeth Shuler at the ALF-CIO headquarters in downtown Washington, D.C. to speak about their book and answer questions from the audience.

Altman and Kingson, cofounders of the nonprofit organization Social Security Works, discussed the importance of talking about Social Security and breaking down constructed myths that our Social Security system is broken, that it  is contributing to the deficit, and that it will not be around when today’s young people retire.

CCC’s retirement security campaign has worked closely with Social Security Works over the past few years in defending Social Security from attacks, as well as shifting the narrative towards the need to expand the system.

David Cay Johnston, the Pulitzer Prize-winning journalist who wrote the book’s foreword, also joined the conversation, saying that there is overwhelming bipartisan support among lawmakers that Social Security should be expanded. “Three out of four Republicans support increasing Social Security benefits,” he explained.

Altman agreed, saying that support for Social Security expansion is widespread among everyday Americans as well.

“As polarized as our nation is,” she said, “it is not polarized around Social Security.”

The event’s large crowd seemed to wholeheartedly agree. One audience member stood up to praise Altman and Kingson for writing this book on such an important issue, calling Social Security expansion “an American value,” “a family value” and something that “makes us stronger as a country.” The book makes the case that expanding our Social Security system would help to reduce inequality in our country by putting less pressure on families that are struggling to get by and lessening the upward redistribution of wealth.

One important avenue for expansion that the book suggests is through a proposed caregiver credit that would give family members who stay home to care for sick, elderly, or disabled loved ones credit towards their future retirement benefits. That way, Americans wouldn’t be punished in retirement for leaving the paid workforce to work as caregivers for their family members.

But even with widespread support, policy changes won’t come by accident. Altman, Kingson and Johnston all made it clear that we must take action and fight for expansion if we want to see if happen.

“The people are with us; now we must lead the politicians to do the right thing,” Altman said.

For more information about the book and where you can purchase a copy of your own, click here.