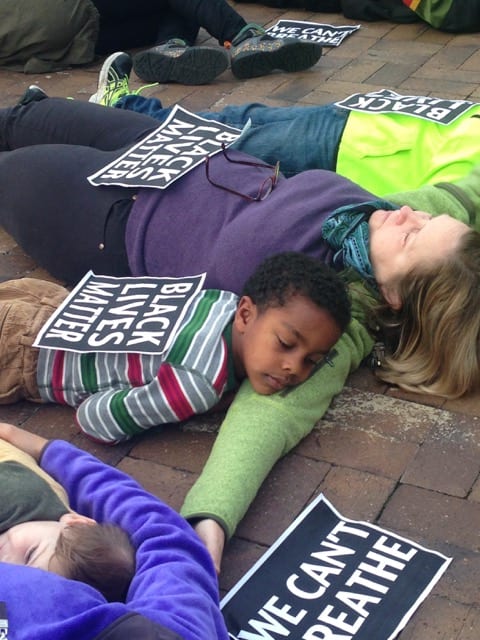 Solidarity in Memphis against police brutality

Wendi C. Thomas is an award-winning Memphis-based journalist, a visiting scholar at the University of Memphis, the founder of the grassroots racial justice organization Common Ground and a Writing Fellow at CCC.

Of the dozens of people lying flat on the ground outside the National Civil Rights Museum in Memphis on Thursday at a solidarity die-in, it was Solomon Phillips who caught my eye.

He squirmed next to his mother as those around him chanted the last words of Eric Garner: I can’t breathe.

Garner, the married father of six, was unarmed when New York police approached him in July for allegedly selling loose cigarettes. On Wednesday, a grand jury failed to indict the white officer who choked the life from Garner’s black body.

Solly is black too.

Phillips and her older son, 11-year-old Gus, are not.

At the die-in protest hastily organized via social media, Phillips and her sons lay with matching signs that read “Black Lives Matter.”

Their bodies rested just feet from the balcony at the Lorraine Motel (which has since been turned into the museum) where an unarmed black man was gunned down fighting for justice on April 4, 1968.

“We can never be satisfied as long as the Negro is the victim of the unspeakable horrors of police brutality,” said that man, Dr. Martin Luther King Jr. in an oft-ignored passage of his 1963 “I Have A Dream” speech.

As the crowd Thursday chanted, Solly found it hard to be still. He lay on his back, his stomach, his side. When his paper sign slid off his little body, his mother repositioned it.

When the protest ended, I approached Phillips to find out why they were there. Phillips’ eyes watered.

I asked Solly why he was there. “Three people died,” he said. “One of them was a kid.”

The kid was Tamir Rice, 12, shot and killed Nov. 22 by a white Cleveland police officer responding to a 911 call about a juvenile carrying what was probably a fake gun in a park – in a state where open carry is the law.

The other deaths were Garner’s and Michael Brown’s in Ferguson, Missouri. Last month, a grand jury there failed to indict the white officer who shot the unarmed black teen in August after confronting him for jaywalking and on suspicion that he’d stolen cigarillos from a convenience store.

The capital punishment visited on Tamir, Brown, Garner and countless other unarmed black men felled by white police officers does not fit the crime, unless the crime is being black.

It is this failure of the justice system to live up to its name for black Americans that anti-lynching crusader and journalist Ida B. Wells vehemently protested more than a century ago.

In her 1900 “Lynch Law in America” speech, Wells said, “For all kinds of offenses – and, for no offenses – from murders to misdemeanors, men and women are put to death without judge or jury.”

The threat of trial by officer terrifies Phillips. I asked her again why she brought her boys to the die-in and she asked her sons to give us a moment.

They drifted off to a nearby bench and she turned back to me.

Talking to her kids about race is a little like talking about sex. She tries to keep the conversation age-appropriate.

“I don’t want my six-year-old to know the full truth of what it means to be a black man in America,” she confessed.

Phillips and her husband adopted Solly the same year President Barack Obama was first elected. “We had hope posters on the walls,” she remembered.

Phillips and her husband discuss “when we’re going to have that talk,” the talk that establishes a different set of rules for how Solly is to behave in public than the rules for his brother Gus.

Solly, his mother said, is “the kind of kid who tests boundaries, who’s tenacious, who’s stubborn. He’s all the things that are great, but it scares me.”

Because what Phillips sees as determination, a police officer might interpret as defiance. The adoring mother sees persistence and the cop perceives insolence.

“If he showed a spirit of courageous manhood he was hanged for his pains,” Wells once said, “and the killing was justified by the declaration that he was a ‘saucy nigger.’ ”

“Frankly,” Phillips said, “this is a white problem. If we don’t change, the problem’s not going away.”

“I know there are protections he has because he has a white mom,” Phillips acknowledged. “But I can’t protect him for the rest of his life.”

What she can do is show up to protests like this one, to organize to dismantle the systemic inequalities built into the fabric of this nation.

But first, she said, she has “to stop being in my own comfort zone.”

Sometimes, getting out of your comfort zone means taking your children and lying down on the cold, hard ground.

Pictured above: Solly and his mother participate in the die-in protest. Photo credit: Wendi C. Thomas.