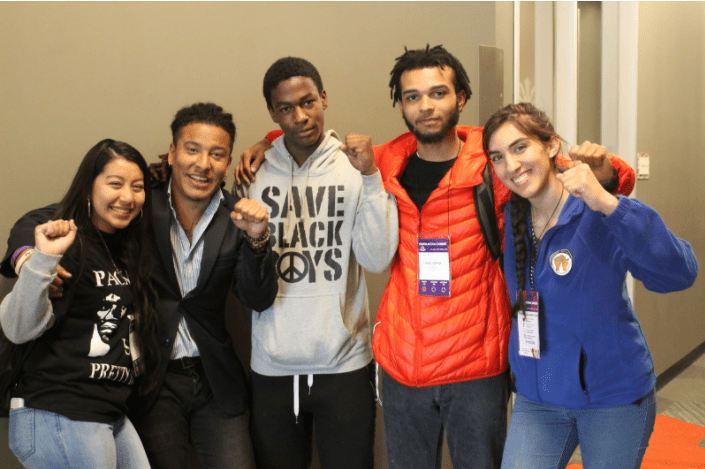 Representing the future is now, as seen through our black and brown youth

Now, more than ever, we must encourage youth to step into leadership. This is the way to cultivate power in our communities that need their voices heard.

I had the opportunity to attend the Youth Action Summit (YAS18) in Memphis, Tennessee, hosted by BRIDGES, an organization that supports students in opportunities to find their voice. This “unconference” brought together a group of vibrant high schoolers ready to expand their networks, building bridges between themselves to create social progress. In the wake of Parkland and the powerful March for our Lives this weekend, we have seen the movement when students come together and get national attention for demanding change. This is another example of young people taking agency over their futures.

Two students in particular had a resounding impact on me. At the beginning of YAS18, I was looking to get more information on where I’d be presenting, and that’s when I heard the hallway erupt in laughter. Down the hallway, I saw a group of students approaching, deep in conversation. Spotting my curiosity, they immediately became organizers and recruited me into their group. They explained they represented Community Coalition in South Central Los Angeles and were focused on fostering Black & Brown unity. Edna identified as an indigenous woman of Guatemala, while Omarion sported a “Save Black Boys” hoodie and was unapologetically Black – both cited mass incarceration as a common ground issue to organize around.

You will recognize Edna as one of the impactful speakers who shared her story and struggle at Washington D.C.’s March for Our Lives. She described her brother dying as a victim of the every day gun violence in her neighborhood, “I learned how to duck from bullets before I learned how to read.” She also described how policing schools results in the criminalization of black and brown students in their own education systems.

At the end of 2016, 29 percent of the male prisoners in California state prisons were African-American, while only six percent of the state’s male residents are African-American. As I am both Black and Latinx, watching them collaborate brought so much joy to my heart. Edna and Omarion both came from different backgrounds, but collaborated together so seamlessly — networking with other activists and giving insight on everything from regional organizing tactics to self-care workshops.

Later during our break for lunch, I heard rousing music emanating from the convention hall’s piano. I turned around and saw Omarion tapping away at the keys and laughed as Edna and other students surrounded him, equally impressed. I couldn’t help but think about how the students were light years beyond me. As I watched 17-year-old Edna share taking on the weight of her community, and ask questions to her facilitator centered around how to have longevity in movement building and consciousness around activist fatigue — I was astounded. In between sessions, I reminded Edna and Omarion that when I was their age, I was completely blind to this kind of leadership work. What made YAS18 exceptionally moving too was to see these black and brown students really embrace themselves in addition to the new friends around them.

Edna’s conviction and emphatic words brought me hope for the future. It also made me worry about how society would receive her. I worried that they would try to hold back her wise-beyond-her-years confidence. She is a boisterous, self-described “Indigenous Warrior” and spoke powerfully about how deportations and mass incarceration were impacting Black and Brown communities in her hometown. When asked about elected officials, she clenched her fists and said, “We need people of our own!”

The look in her eye as she explained the importance of representation in public officials was invigorating. She carried the same infectious energy as other powerful leaders I’ve been pleased to work with, such as civil rights leader Dolores Huerta. If I could have endorsed her right then and there I would have.

I fought back tears envisioning them leading after I’m gone. But despite my emotions, I shut up and continued to listen to them speak. This is what adults and allies need to do when it comes black and brown youth. We know that when young people vote, progressives win. But we need to listen. We have seen the amount of money not spent to reach black and brown youth as voters. Even at the height of Obama’s popularity, between 2010-2012, $8.7 million (just 1.7 percent) of $514 million that Democrats spent went to minority outreach, according to a June 2014 study by Democratic minority advocacy firm PowerPAC+.

After the victory of Connor Lamb in the recent special-election in Pennsylvania, some Democrats felt a centrist approach appealing to “Trump Country” is the winning strategy. This short-sided view will only continue to alienate the Millennial-heavy progressive base and increase the growing number of young people that are forced to choose self-identity over party.

On the fringes of race, deportation, voter disenfranchisement, incarceration and environmental injustice are constant barriers and reminders as to why our fight centers around frontline communities. In certain states where Black and Brown youth can make a considerable difference, voter ID laws target them to make it harder to vote. This was specifically discussed amongst participants at YAS18, during a regional organizing workshop as something Southern youth feel keep their peers from being engaged.

With both Blacks and Latinx making considerable gains in certain spaces like education and business, it is alarming to see America’s constant efforts to keep them out of power. Still, recent reports show that the Latina population has increased 37 percent in the past decade as opposed to two percent for their white female counterparts. Latina-owned businesses have also boomed, growing a whopping 87 percent (more than 682,000) in the past six years. On the other end, Black women have become the most educated group in the United States, and increased their business ownership by 322 percent since 1997. Despite these gains, both are paid significantly less than their white male counterparts – earning anywhere from 54 to 64 cents on the dollar.

It would seem like a no-brainer for America to invest in young folks like Edna and Omarion, but the existence of systems that deliberately keep these communities further from spaces of power is the clear need for real change. Otherwise, we are stagnating our collective economic potential and growth as a country. If America truly wants to live up to its ideas as a country, it must stop overlooking all of its sons and daughters, and instead, nurture them. Investing in them will lead to the economic prosperity that America promotes and allow all of us to pave a road towards a more inclusive and progressive future.

In this edition, we highlight Dorian's thoughts on the current political climate, share how our partners and programs are thriving …

This Toolkit discusses strategies that deliver high quality jobs with career pathways accessible to workers in low-income communities and communities of color....