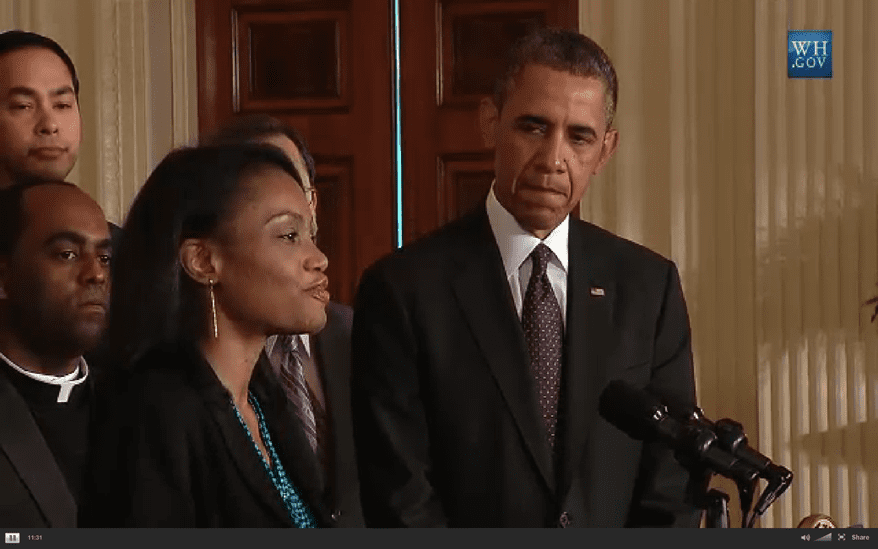 When I watched DREAMer Tolu Olubunmi (video below) introduce President Obama, I clapped the entire time. Many immigrants like Tolu have stories that led him or her to America. But few of us are as lucky as Tolu to have an opportunity to devote their lives to achieving immigration reform. There are hundreds of thousands of us living in the shadows afraid that our families will be torn apart at any time.
The President reminded us that this is a “common sense, bipartisan bill,” and one that can pull these families out of shadows. “There is no good reason to stand in the way of this bill…there is no reason Congress can’t get this done by the end of the summer,” said President Obama in his remarks.

I was lucky enough to come to this country with documented status. But even as a student I have had to face the many problems of our broken immigration system, including a huge backlog for entry. My family and I waited for 15 years to come to this country, and I have been waiting for six months now for my fiancé’s visa to be approved. As President Obama said today, “People wait for years to join their loved ones. That’s the broken system that we have today.” No one wants to be separated from their loved ones, their families. Our current broken immigration needs to be fixed. Everyone should have the right to a better life; everyone in this country should be granted an equal opportunity to pursue their dreams. We need to make sure that happens.

This morning, President Obama stood behind the podium with all sorts of people: people of different careers, races, and backgrounds. What these people had in common, though, was their belief in repairing our immigration system. On that stage, President Obama was not speaking as simply the President of the United States; he was speaking as a collective voice of a community of concerned citizens. And his message was an urgent one, to both Congress and to his fellow citizens.
President Obama called for compromise to fix the immigration system in place now. It is up to Congress to take “the broken system we have today,” as he put it, and find a bipartisan solution to the problem of immigration in the U.S.

But the onus is not just on the legislators. Obama specifically appealed to all of us to call, email, tweet, reach out to our representatives, urging them to focus their attention on fixing the broken system.
Listening to the President, I saw the picture he painted of the American Dream, in which any person can succeed. Now it is up to Congress, and to you and me, to ensure that comprehensive immigration reform passes this year.

President Obama emphasized that immigration reform is “not an abstract debate.” Yes, immigration does play a key role in our economy and in our ability to grow and innovate as a nation, but perhaps more importantly, immigration plays a key role in the lives of communities and families across the nation.  As Tolu Olubumni exemplified, immigration is a human issue.  It has taken our country years to even come close to reaching a comprehensive immigration reform bill that could mend our failing immigration system.  And in the Senate, that is what we have.  This bill may not be perfect but it is a great alternative to the current policies and the time is now to act.

I think that the strongest call to action in President Obama’s address was his emphasis on leaving something better for future generations. Dealing with the problems we have now and working toward a better future for immigrants.  The effects of our unproductive system are real; for the families, for the businesses and for the immigrants involved. As President Obama said, “We owe it to America to do better.”