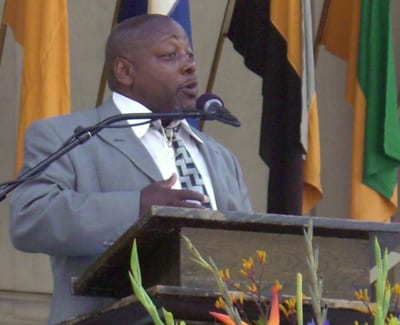 It's Time To Restore the Dignity of the Formerly Incarcerated

Anyone with a conviction history faces a constant barrier to being an involved, productive member of our society.

I do not define myself as an ex-convict; I am a person. To use that term is to take the worst moments of my life and call that a whole life.

I know there is more to life and that’s why I am now speaking out and fighting for the restoration of human dignity for myself and the 65 million formerly incarcerated persons living in the United States.

I was convicted of first degree murder at age 19 and sentenced to life in prison. Although I was tried and sentenced as an adult, reading through my letters to friends and family at the time it is clear that I was still just a child. In 1981 I was released on parole after serving 10 years in prison. In the three decades since my release, I have been working to expose the flaws in a system that now holds over two million people in cages and seven million under criminal justice control. It continues to bar us from becoming productive, engaged members of society.

If we wish to address the startling rate of incarceration in our country we must ask ourselves, are we living with a broken system or broken people? Policy and national dialogue suggest the latter, and so we continue to blame individual weakness and failings. And yet, 65 million people in our country are survivors of incarceration, and black men are six times as likely as white men to be incarcerated during their lifetime.

We cannot continue to claim imprisonment is the product of individual character flaws – there is something larger, something broken about our system. Until we can accept a systematic failing, we will never be driven to fix what’s broken and we will continue to see structural discrimination against one third of our country.

Anyone with a conviction history like me faces a constant barrier to being an involved, productive member of our society. It is a small typeset box that asks, “Have you ever been convicted by a court?” Checking that box on rental applications, job applications, loan applications, and almost any form you could imagine plagues our everyday life.

That box tells me I have fewer rights and prevents me from engaging in democracy as others can, all because of the worst moment of my life.

As a co-founder of All of Us or None, a project of the Legal Services for Prisoners with Children, I am working to “ban the box” in communities and states across the country. We have harnessed the power of our community of 65 million formerly incarcerated people to stand up and demand that our human rights be restored. We may be locked out of our democracy, but there are still ways for us to engage in a process that excludes us.

And it’s working – more than 50 cities and 10 states have banned the box on public employment applications. We will continue to speak up, engage in our communities and use our voices until our country acknowledges and fixes a broken justice system.

While we are a community that is often forgotten and one that policymakers rarely talk to, we will not give up on the pursuit of our human dignity. We cannot afford to lose the talents and contributions of 65 million people in this country.

All of Us or None and its co-founder Dorsey Nunn are Center for Community Change 2014 Change Champion honorees. Nunn is also the executive director of Legal Services for Prisoners with Children.