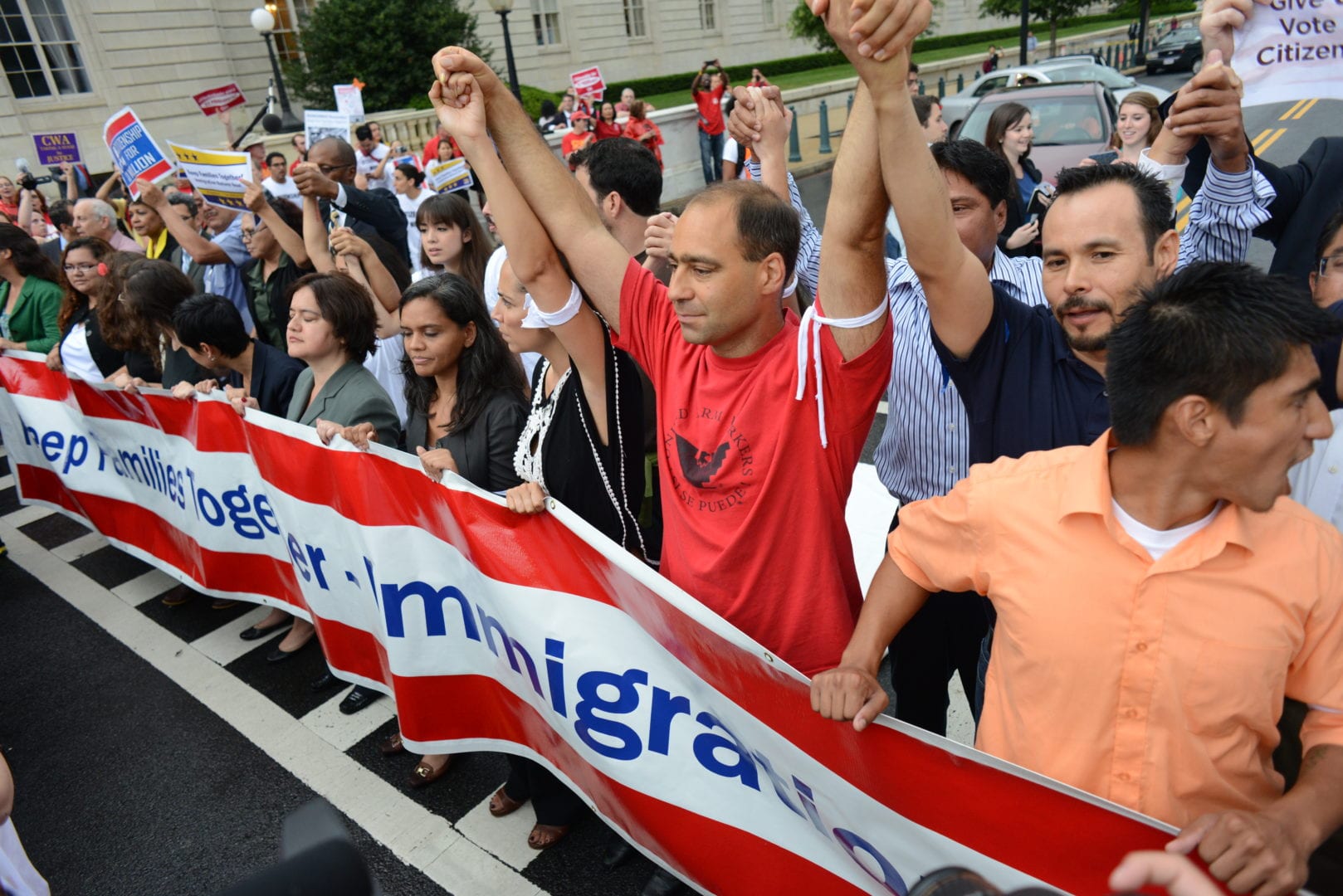 20 Most Powerful Moments of This Year's Immigration Reform Fight

In 2013, activists in the immigration reform movement have been hard at work. Hardly a day has passed that a Fair Immigration Reform Movement (FIRM) group has not held an action, visited members of Congress, sent letters, protested and prayed to bring attention to the dire need to pass immigration reform.

Here is a recap of some of the most powerful moments from this past year.

1.) February 25th- When thousands of people from across the country joined our massive national bus tour that went through 20 states and 90 cities to spread the stories of families separated by our broken immigration system far and wide.

2.) March 13th- That time we shut down the Republican National Committee (RNC).

3.) April 10th- 100,000 activists from across the country showed up on the National Mall to demand comprehensive immigration reform.  CASA in Action, SEIU, civil rights organizations and many others helped make that day possible. 4.) May 1st- Tens of thousands of people came out for events in more than 100 cities with the common goal of supporting comprehensive immigration reform that keeps families together.

6.) May 21st- Seven DREAMers affiliated with FIRM groups chilled out with President Obama and Vice President Biden in the Oval Office.

7.) June 27th- Activists maintained a constant presence in the Senate Judiciary Committee hearings as members of Congress debated the Senate’s version of the immigration reform bill until the bill was passed on June 27th, 2013. CASA in Action played a significant role in this event.

9.) August 1st- 45 of our movement’s biggest leaders, including Campaign for Community Change Executive Director Deepak Bhargava, were arrested for blocking traffic on Capitol Hill to emphasize the urgency of passing comprehensive immigration reform with a path to citizenship. 10.) August 1st- And then later that afternoon, when over 100 advocates descended on congressional offices to visit their representatives. Additional arrests were made in front of Speaker of the House John Boehner’s office when a group of activists sat down, blocking the hallway, and refused to move. 12.) September 12th- 104 women sat down in a busy intersection in front of the U.S. Capitol and refused to move until Capitol Police took them away in handcuffs. 13.) October 5th- FIRM and its partners held 177 events in 40 states and 150 cities for the National Day of Dignity and Respect.

14.) October 8th- Eight democratic members of Congress were arrested alongside more than 200 immigrant rights leaders to demand action on immigration reform in one of the biggest acts of arrestable civil disobedience in the history of the nation’s capital. 15.) November 6th- 13 women occupied GOP Whip Kevin McCarthy’s district office for more than ten hours to demand a meeting with the congressman. A little past 11 pm, Kevin McCarthy, his wife and a small entourage of police officers and staffers walked in the door and agreed to sit down to talk with the women about immigration reform.

16.) November 13th- That time two young girls stood up to the most powerful Republican in the United States. Click here to watch the full interaction.

18.) November 14th- And later that day, when young activists marched right up to Speaker Boehner’s office to deliver their messages.

19.) December 12th- We held vigil in over 175 congressional offices simultaneously– the organizing of which was led by CASA in Action.

Though the intransigence of Republican leadership got in the way of a victory this year for our families, 2013 has still been an incredible year for our movement.

In the words of FIRM’s Director of Immigrant Rights and Racial Justice Kica Matos, “We will continue to do this work in 2014, every single day. We remain ever focused on our goal, and we are undeterred by the obstacles thrown in our way in 2013. We have grown in numbers, our political strength is undeniable and our voices will not be silenced. We will see Congress on day one of their 2014 session.”