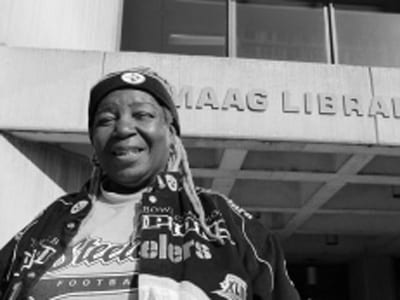 Why I won’t be quiet.

Growing up my parents used to tell me “A closed mouth doesn’t get fed, if you have a problem, you need to let people know about it.” That always stuck with me. In 2009, when I lost my job and my health insurance, I started talking about it with the women in my neighborhood, some of whom were going through the same thing.

That was when I met with an organizer from the Ohio Organizing Collaborative, a Community Change partner, who told me how I could get involved in the healthcare fight by telling my story.

I began going around and telling people my story about losing my health insurance. Many of them had similar experiences, but they were scared to speak up. I would tell them that I am telling my story to speak for those who are afraid. But after I was done, many of them would start to speak up as well. I spoke to everyone, Republicans, Independents, Democrats.

A lot of people I spoke to were not on board with Obamacare at first. They had a lot of misgivings and many of them didn’t really understand it. But after I talked to them, they would see it in a different way and then they would support it and go out and talk to other people about it and get them on board too. Even after Obamacare passed, I continued to work with OOC. When the bank tried to foreclose on my house, I used the grassroots organizing skills I learned to fight back. So I studied up on foreclosure laws. I knew that if the bank kicked me out of my house, they would have to pay the city of Youngstown $10,000 because the city enacted a new law requiring banks who want to foreclose on properties to pay a $10,000 bond on each structure in an effort to make those lending institutions more accountable.

Once you start talking about money coming out of their pocket, the banks are more willing to figure out how to keep you in your house. So they forgave my debt and I maintain the property and pay the taxes.

Now I am known in my community as a fighter. I feel more powerful now that I am able to help the people in my community. The skills I learned when I attended a Grassroots Ambassador training session helped me help myself and so now, I can help others. There was a whole group of us from Youngstown who went to the training and we formed our own community group that meets regularly to discuss the problems facing our town and to build strategies to fix them.

Getting involved, knowing your rights, and standing up and speaking out for what you believe is so important. I have a 7-year-old great-grand daughter, Ja’Nia. I tell her, “I’m doing all of this for you, so you can watch me and then one day you can do it too.” And you know what, she tells me that when she grows up she wants to be just like me. I hope it’s true.