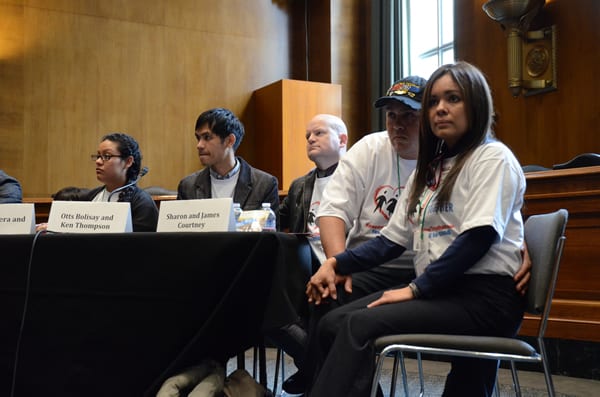 Your Hard Work Pays Off

Three months ago, immigrant families from across the country came to Washington, DC to rally for comprehensive immigration reform. With the coordination of the Fair Immigration Reform Movement (FIRM), several families gathered for a hearing before a group of Congressmen to tell their stories of living as a mixed status family.

Among those testifying were Sharon and James Courtney. James is a 15-year U.S. Army veteran who served three tours in the Iraq War where he sustained traumatic injuries. Sharon is now the primary caregiver of her husband and three children, ages 16, 11 and 8. Sharon is also undocumented.

Sharon and her family feared every day that she could be taken from them. Last Wednesday, however, Senator Harry Reid (D-Nev) stepped in to have her deportation deferred because of the testimony she gave in March.

Likewise in April, Jagmohan Singh was threatened with immediate deportation. Jagmohan came to the United States to avoid religious persecution 13 years ago and is now the breadwinner for his wife, a U.S. citizen, and their three U.S.-born children.

FIRM stepped in to tell his story to the nation and the nation responded. Nearly 5,000 people signed a petition demanding that Jagmohan be allowed to stay with his family, and just a few weeks later, he was granted a one-year stay.

It is important to remember these victories because the work you are doing IS making a difference. It has been a long fight, but there is now an end in sight. Passing comprehensive immigration reform with a path to citizenship would transform the lives of millions of families in the U.S., which is why it is so critical that we keep fighting until all families are able to live free of fear.