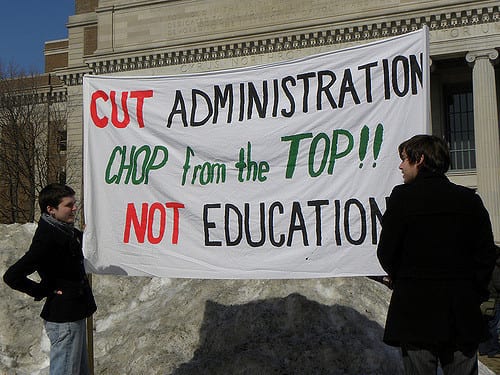 Late in April, approximately 1,000 students in the Upward Bound Program at The University of Maine Presque Isle (UMPI) received notice that their funds would not be continued, due to the line spacing of their funding application. Programs like Upward Bound work to “level the playing field” by allowing students from low-income families entry into higher education, something they might have not otherwise had. Upward Bound, along with Educational Talent Search and McNair Scholars – collectively known as TRIO – are federally funded programs resulting from the 1960’s.

At UMPI, all members of the Upward Bound Program, including first generation students and the staff hired to support them, lost the funding that gave them access to institutions of higher education. But none of that mattered to our new Secretary of Education, Betsy DeVos, and the Department of Education, who denied the recent application due to formatting errors. And UMPI was not alone. Other colleges were not only denied funding based on small errors but were also told they weren’t allowed to fix them.

The President’s new budget proposes massive cuts to the Department of Education. Amongst the most problematic is a $15 million cut to a program that provides child-care for low-income parents in college. In the early 1990’s, I was one of these parents. Without financial supplements by way of affordable childcare and co-operative opportunities at my community college, post-secondary education would not have been an option.
In the proposed budget, grants to states for career and technical education would lose $168 million; adult basic literacy instruction would lose $96 million. There’s no support allocated to a $400 million student support and academic enrichment fund Congress created this fiscal year by rolling together smaller programs. A product of both the California Community College system and state and private universities, I graduated because of the EOP&S/CARE childcare programs, along with the EOP and Pell Grants available during my upperclassmen years, even as a former high-school dropout.
Perhaps one of the most detrimental changes would be to students who receive financial aid – especially those who receive and rely on the popular Perkins loan and federal work-study programs. My entire education would not have been possible without access to financial aid in all of its various forms. In addition, the loan forgiveness program that serves social workers, public defenders or doctors in rural areas is also on the chopping block. My own combat veteran spouse utilizes such programs.

Without educational programs like TRIO, the world would not have its alumni that contribute to the meaning of excellence. Viola Davis, Academy Award winner and should-be-professional-speaker, is a proud Student Support Services alum. Upward Bound produced John Quinones, Jimmy Jam, and Terry Lewis. TRIO alumni include Oprah Winfrey and are found in the NBA, NFL, NASA, and even the Democratic National Convention.

The Education Department still had not indicated whether or not those denied applications would be reconsidered. During the wait, thousands of students twisted in the wind with concerns of not completing or starting their journey to higher education. Finally, the Department and other officials heard the outcry over the injustice and changed their position.
On May 24th, DeVos announced that the 77 applications previously denied would be reconsidered – largely due to a $50 million spending bill. She stated that Congress’s passing of the 2017 Omnibus spending bill allowed them the affordability to review the affected applications and that bureaucracy should not impede students. DeVos’s statement resembles empathy and can allow those affected to breathe a temporary sigh of relief.
This policy change is the right thing to do. It provides much needed hope after Trump’s plan to butcher the budget. In the proposed $9.2 billion cut—the work of Trump officials with access to the upper echelon of education—the loss of opportunities for all levels of education would be incredibly detrimental. At the very least, this plan’s lack of loan forgiveness would discourage those drawn to work in education.

This doesn’t have to be our reality. If the citizens of the United States have forgiven and can continue to forgive our government when they make a mistake—even a grammatical one—our government should return the favor. Here in America we call this access, and it is one of our treasured values that has always made us great.

Sharisse Tracey is a writing fellow for the Center for Community Change.