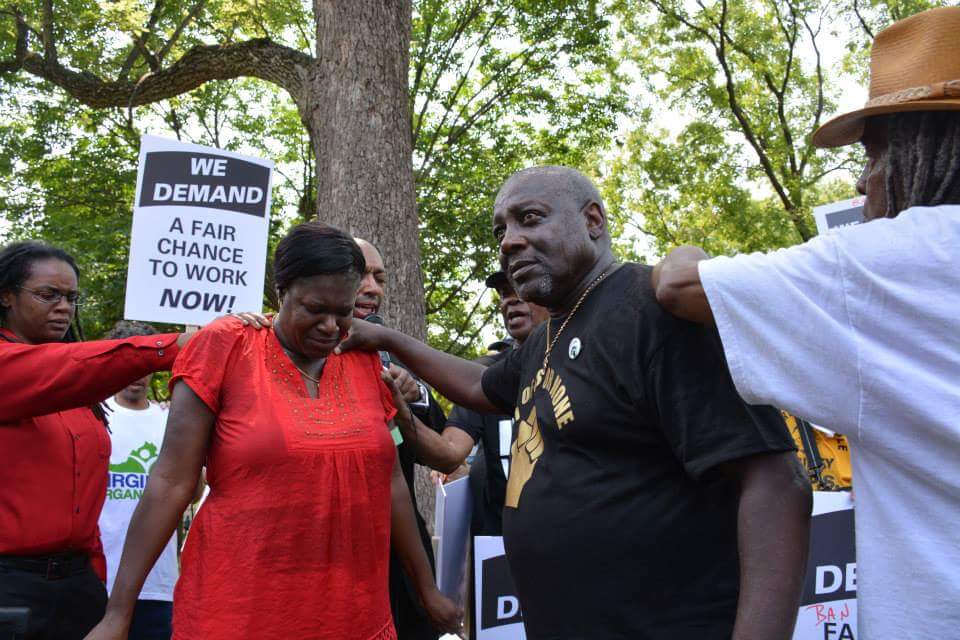 Formerly incarcerated people and their loved ones welcomed today’s introduction of the Fair Chance to Compete for Jobs Act of 2015 by Sens. Cory Booker and Ron Johnson, and Reps. Elijah Cummings and Darrell Issa as a sign of actual intent to solve the issue of employment discrimination for more than 70 million people with arrest and conviction histories.

While they look forward to working with Members of Congress to enact effective legislation to ban the box, the reality is that even though President Obama expressed support to ban the box he still hasn’t taken action. We know he can through the recent strings of executive orders he has signed for worker rights. The Ban the Box campaign was developed over 10 years ago by formerly incarcerated people at All of Us or None, who used their lived experiences to demand policy changes. These are reactions and comments from individuals and families impacted by mass incarceration who see this policy change as essential to their economic well-being.“We are happy to see legislation toward banning the box. However we are analyzing it and will not take a position on it right now because we have some concerns. But we are still waiting on the President to keep his word and sign an executive order to Ban the Box. We need a chance to take care of our families, pay our taxes, and be productive citizens. Why would you spend the taxpayers’ money to keep us under convictions, when we can pay our own taxes and help the economy.” Kenny Glasgow, The Ordinary People Society, Dothan, AL

“A bill to allow a fair chance at obtaining employment no matter who you are would mean the world to me. I have returned to society after having served 15 years in several stays in TDCJ and it is extremely difficult to obtain employment even though I am highly skilled in HVAC, electrical, carpentry, and have a BA in Pastoral Counseling. As I fill out an application I am stopped at the check box and computers actually kick me out of the application program. The work I do obtain I am paid at least 1/2 of the going wage and usually know more than my coworkers. Just a chance to get to the interview process without worrying whether my 1990 felony will affect my chance at a commercial contractor’s position would mean a society that believes a man or woman who has paid for their wrongs has an actual right to earn a living and pay their way in life.” David Collingsworth, Houston, TX. “We are very happy to see this bipartisan push to Ban the Box, but we know that a very small percentage of bills make their way to becoming a law.  We hope the President will stay involved and get an Executive Order in place that can end this discrimination immediately.” David Liners, WISDOM

“As an ex-offender Ban the Box is personal to me.  Having spent seven years in the Texas Department of Criminal Justice I came home to many employment barriers.  Most employers see the checked box and the application is thrown in the trash.  Incarceration drains ones self-esteem.  To be denied over and over for jobs only continue that damage.  We are asking you to interview us first, then make that decision if we are the right one for the job or not.” Sharon Bass, Texas Inmate Families Association.

We celebrate the introduction of the Fair Chance Act of 2015 as a response to our recent advocacy efforts. On July 30th, directly affected people organized with other grassroots organizations and rallied to Ban the Box nationwide in front of the White House. On September 8th, actions escalated by confronting local federal contract association members as part of a national day of action to further advocate the need for an executive order.

Support the more than 650,000 people released from prison every year who lack resources or opportunities to emerge from enforced separation to rejoin their families, sign this ColorofChange.org petition to call on President Obama to sign an executive order and memorandum to ban the box.