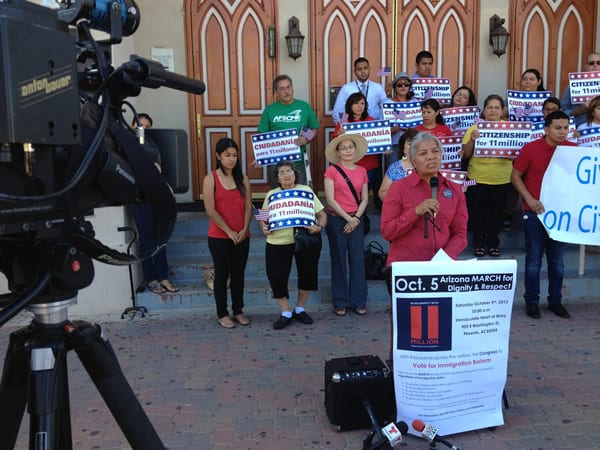 Preparing for Mass Mobilizations Across the Country on October 5th

Thousands of families across the country will mobilize on streets across the country on October 5th, and here’s why: Although we’ve sent out a very clear message at the polls, anti-immigrant politicians still insist on imposing a system that breaks families apart, devastates local communities and ignores our deep, beautiful immigrant heritage.

Here in Arizona, the fight for basic immigrant rights as alive as ever. Governor Jan Brewer – who jumped to the international spotlight for legalizing racial profiling – just expanded her ban against issuing driver’s licenses to “deferred action” recipients. Now everyone granted deferred action is banned from requesting a driver’s license in the state. In other words, people who are legally here will have their lives complicated by not being able to drive, making it harder for students to go to class, and for mothers to go to work.

For us, this fight is not separate from the movement to pass comprehensive immigration reform at the federal level. The status quo imposes an unjust burden on working immigrant families. Every day that goes by, employers exploit immigrants, victims are afraid to report domestic violence, valedictorians are left out of the professional world, and mothers and children are ripped apart.

This is why our resilient immigrant rights movement continues to fight, and why we’ll be out in force on the Arizona March for Dignity and Respect. We’ve voted, we’ve won battles, we’ve marched, and we’ve called. And while the broader victory is in sight, we understand that there is more work to do.

On October 5th, the eyes of the country and the world will be on the immigrant rights movement. The National Day of Dignity and Respect will see our community unite once again and stand up for justice and call for immigration reform with a pathway to citizenship. We hope to see you there.