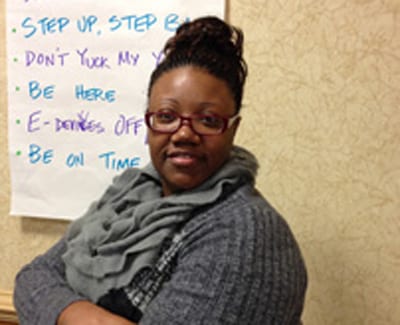 This blog was originally published on MomsRising.org.

When my sister-in-law was pregnant with her first child, she drove me crazy, calling me at all hours to tell me about every little ache and pain she experienced. When she was six months into her pregnancy, her water broke. She realized something was off, but it never occurred to her that she might be in labor because it wasn’t the time. She went about her day, working and even stopping for ice cream. At home that night, she told my brother, a first-time dad who immediately called our sister. Our sister, a mother of two, told him to get my sister-in-law to a hospital now. There, doctors confirmed that she was in labor. We almost lost my beautiful niece because she was born so small, her premature lungs not ready to let her breathe on her own.

Four years later, my niece, Harmony, is here, her voice and breath strong. I think of her birth, so fraught with anticipation and uncertainty, today when I think about where we are as a community to birth a black movement. The shooting in Charleston, S.C. on Wednesday of nine parishioners in a historic black church that included a state senator among the targeted, points to the urgency of growing and strengthening this nascent movement.

There are naysayers who fret that such a movement isn’t ready, that we have no Dr. King to lead and inspire us, that we don’t have the relationships or the plans or the funding in place to make such a movement sustainable. But I say, like my niece, the movement is here and it’s coming whether we are ready or not. So we have to rise to meet it.

The growing pains of this birthing process have been with us over the last year. We felt them when police killed Eric Garner and Michael Brown and Tamir Rice. We felt them when a Charleston police officer shot Walter Scott in the back. We rose up to say Black Lives Matter. We embodied the words of our ancestor, beloved activist Ella Baker when she said, “”Until the killing of black men, black mothers’ sons, becomes as important to the rest of the country as the killing of a white mother’s sons, we who believe in freedom cannot rest.”

The attack at Emanuel African Methodist Episcopal Church should spark in us the same anger and call to action that we saw when Medgar Evers was assassinated and our churches were bombed during the era of “the old” Jim Crow. The intent here is the same: To use fear to stop a growing movement and strangle our voice.

The new Jim Crow chose to target the oldest African Methodist Episcopal church in the south, a church founded by formerly enslaved Africans and rooted in the spirit of social justice. The new Jim Crow chose to kill eight parishioners and the pastor, Rev. Clementa Pinckney, a state senator with political power in the legislature and a symbol of black pride for the community.

In 1963, after four young black girls were killed by a bomb racists put in a Birmingham church, Dr. Martin Luther King Jr. said this: “We must be concerned not merely about who murdered them, but about the system, the way of life, the philosophy which produced the murderers.”

We must resist the urge to see the man who assassinated Pinckney and his congregants as a vigilante or an outlier. He is the product of America’s destructive system of oppression and violence.

The white hoods may not be as visible on the public stage in today’s America, but the tactics are the same. Our response at this critical moment will determine the potential of this movement moment. Do we rise?

Now is the time. Now is the tipping point. The baby is coming and we should all be shouting, “Push!”