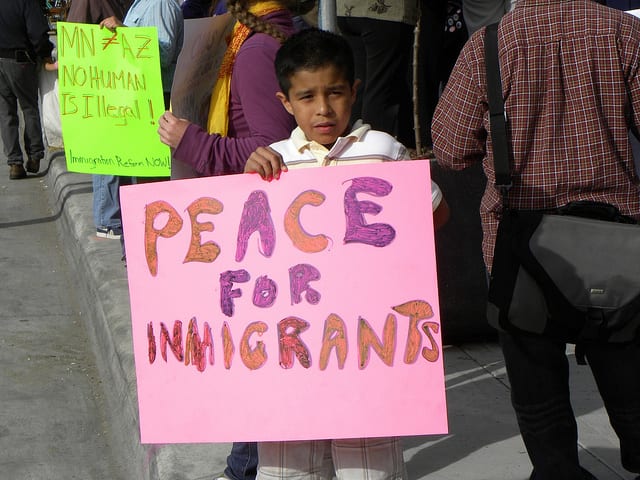 In the Trump era, efforts to curtail the aggressive criminalization of immigrant communities have largely focused on the fight over sanctuary cities. Sanctuary cities are localities that welcome immigrants and seek to limit the cooperation between local law enforcement and federal immigration agencies to arrest and detain immigrants.

We have seen numerous states fight grueling legislative battles over this issue. California recently passed a bill effectively declaring its limited cooperation with Trump’s deportation force, and Oakland’s Mayor Libby Schaff warned residents of impending ICE raids in the city in a move that spared hundreds from possible detention and deportation. Texas, on the other hand, passed a harsh anti-immigrant bill in 2017 that allows police to racially profile anyone under suspicion of being an undocumented immigrant.

How did we get here? When did our immigration enforcement become so mean spirited? While American history is littered with examples of harsh anti-immigrant policies (Operation Wetback and Bill Clinton’s anti-immigrant bills are examples from recent history), a lot of what we currently see as the framework of enforcement can be traced back to the aftermath of the attacks of September 11, 2001.

In 2002, the Department of Homeland Security was established with the purpose of connecting the surveillance infrastructure between local and federal law enforcement agencies. At the time, there was a lot of finger pointing in regards to how such a large terrorist attack on the United States could be pulled off without our intelligence services taking notice and the conclusion was that these agencies were not sharing their data effectively (even though then-President Bush was presented with memos warning that terrorists were planning on using commercial airplanes against unspecified civilian targets).

What followed was radically expanded federal surveillance powers that co-opted local law enforcement as an immigration crackdown tool under the guise of border and national security. With the establishment of the Immigration and Customs Enforcement (ICE), deportations spiked, and a Bush-era initiative called Secure Communities or “S-Comm,” which would be fully implemented under the Obama administration in 2013, altered the way in which the information of detained immigrants was handled.  Traditionally, when a person was arrested by local law enforcement, fingerprints were sent to the FBI, which would run a background check to see if there were any outstanding warrants. Under S-Comm, those fingerprints were shared with ICE, who could put a detainer request on an individual to be deported.

S-Comm would eventually be limited in scope thanks to challenges by immigration activists during the Obama era. But the Trump administration has reinstated it in full force amidst its harsh anti-immigrant crackdown.

The massive surveillance system put in place post 9/11 has put immigrants in the United States under special threat. Aggressive policing in vulnerable communities can result in possible detainment and deportation for small infractions like driving with a broken tail light or loitering.

The dismantling of the surveillance state is a necessary long-term project necessary to preserving civil liberties of all Americans, but a more achievable goal in the short term is to enact common sense criminal justice reform.

It’s not enough to limit cooperation between local law enforcement and federal immigration authorities, it is also imperative that aggressive policing and arrests for low level offenses be stopped.

Harmful policies, such as stop and frisk, promote the racial profiling of black and brown communities. To stop this, the fight for criminal justice reform and immigrant justice need to be treated as one.