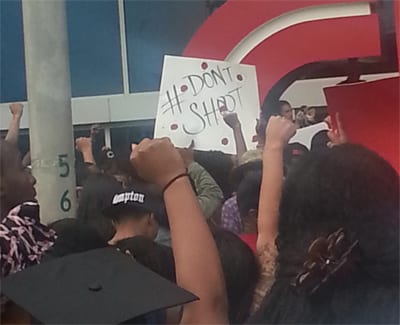 When Enough Gets to Be Enough

This blog was originally posted on the Voices for Human Needs blog.

On Monday night, thousands of people marched through downtown Atlanta in the pouring rain.  Most of them I had never seen. The march was multiracial (though mostly Black) and multigenerational (though mostly collegestudents). Protesters wore suits and dresses, caps and gowns, shorts and sneakers. Many of them, if not most, had never before attended a protest. Nonetheless, they braved the storm, rallied, marched and chanted to stand in solidarity with Ferguson, Missouri.

As most news-watching Americans know by now, on Saturday, August 9, 18-year-old Michael Brown was shot at least six times while unarmed by a Ferguson police officer. Witnesses say he was running away from the officer when the first shots were fired, then turned, put up his hands and surrendered. The officer continued shooting. For four hours, Mike Brown’s body lay in the street in full view of community members. People gathered, with many taking photos and video of the disturbing scene.

I came across several of those videos on my Facebook timeline. I avoided them, mainly because I had grown tired of seeing videos of Black people being brutalized and killed by the police. Shortly before Mike Brown’s death, there was John Crawford. A few days prior, there was Denise Stewart. And a few weeks before that, there was Eric Garner. So many incidences in such a short time span can make one grow weary.

When I came across the video of Mike Brown’s mother, however, I watched. I watched, and I grieved for her and her son. A mother, like me, of a Black boy, like mine, who had done all she knew to do for her child, and had to witness his lifeless body lying in the street for four hours. She had failed, she exclaimed to the reporter, as the crowd assured her that she had not. And the people gathered and mourned. And for ten days they have taken to the streets demanding accountability from the police and justice for Mike.

For too long, the people of Ferguson have felt voiceless, unable to harness the political power they need to create change. They feel as though their vote doesn’t matter. This, among other things, is why civic engagement is low in Ferguson’s African American community. This is why, in the majority-Black city of Ferguson, the mayor and five of the six council members are White.

Feelings of powerlessness come from a long history of both racial and economic injustice. A contentious relationship between the police and the Black community, coupled with an untenable financial climate made the murder of Michael Brown the last straw. In the past five years, Black drivers in St. Louis County, where Ferguson is located, have made up over 80 percent of police stops. Unemployment among African Americans is consistently two-to-three times higher among Black residents than among Whites in St. Louis County. And with an unemployment rate of 47 percent for Black men ages 16-24 in the metro area, compared to 16 percent for young White men, frustrations had no doubt been building.

“I believe the economic piece has been the chain around the ankle of towns like Ferguson,” Anana Harris Parris, a volunteer who helped organize the rally, explained to me. “Pair it with the cancer of racism in a community with no hope and you get a Ferguson, with people who are hungry to be treated fairly.”

Community Change for Community Change is working with people like those from Ferguson to help them access the justice they crave. By giving a voice and a platform to Americans who struggle against racial and economic injustices, the Center will give communities like Ferguson hope that they can build power to bring about the changes they want to see.

I asked a group of Clayton State students what made them attend the rally. “Time after time, time after time, enough gets to be enough,” one young woman said. Surely, Ferguson residents and allies across the country have declared that enough is indeed enough. And until power and hope are brought back to those struggling in this country, people across the nation will continue to stand up and speak out, like I did with 5,000 of my brothers and sisters on that rainy Georgia night.

Tamika Middleton is a Writing Fellow at the Center for Community Change.