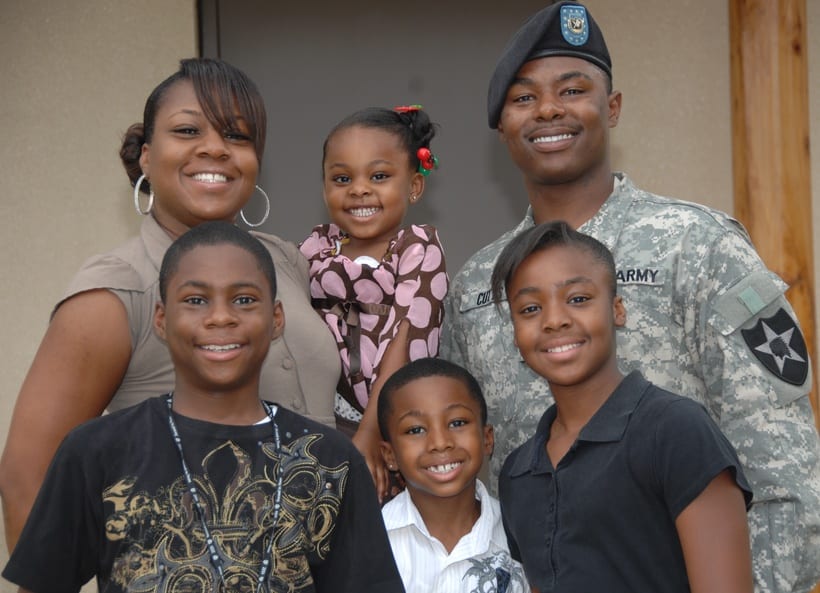 As a military spouse, I see firsthand how civilians might think our families are a protected class because our job description is basically to protect America. But we face the same economic and financial struggles as any other American family.

Some military families depend on food stamps because the base pay rate for soldiers is not as high as you would think. For privates, it’s less than $20,000 a year. For lieutenants, it’s just about $37,000 a year. That forces some families to work second jobs to make ends meet. And often times, there is a waiting list for base housing, forcing families to find a place to live on meager salaries.

Military families don’t choose this path for the money, they choose it because they want to serve their country. But sometimes their country does not seem to serve them. Here’s my family’s story under President Obama and President Trump.

My family and I were newly stationed at the prestigious United States Military Academy where my chemistry professor husband’s assignment was a three-year tour in 2008. Five months in Barack Obama won in a historical outcome. As a black woman I was proud to see something I never thought possible in my lifetime but always dreamed of. I felt pride whenever our president spoke on television and honored to hear his voice echoing through speakers during a commencement ceremony. I continued to support President Obama even when his Administration made decisions that adversely affected my family.

In 2014, President Obama mandated a reduction of active duty service men and women by 40,000. That led to many soldiers not being promoted—including my husband—and others forced to retire early were simply given a two-week notice that their military career was over. The lucky ones received an opportunity to apply for early retirement with no guarantee of approval and to be eligible for a percentage of the full pension they’d worked for. The rest were left scrambling, unemployed and without much assistance from places like the understaffed, overwhelmed and overburdened Veterans Administration.

Still, I supported President Obama because his message of hope was one that aligned with my spirit. I believed at the end of the day our country would be superior under his leadership.

During the 2016 primary I believed Hillary Clinton’ s experience and policies were more suited for the progressive direction I wanted for myself, and all citizens of The United States. Still, our country delivered another historical election, and Donald Trump became our 45th president where he ran on Making America Great Again by rebuilding what he called a disastrous military and putting our country back to work. Yet within his first 100 days in office he initiated and enforced a hiring freeze within the federal government that discourages veteran soldiers from retiring. One of the only perks of being a veteran is the ability to have well-earned preference in being hired in positions within the government they’ve been serving. A so-called advantage that doesn’t come easy but was swiftly removed under this new administration. Now, veterans must wait at least six months before applying for a position within the government, and if they were recently offered a position that job is no longer available to them. This recent change in policy forces many to look for work in the civilian sector that doesn’t always value the unique set of skills from our men and women in uniform.

It’s time for our government to fulfill its obligations to our original first responders and to the people we ask to sacrifice the most who often ask for the least. It’s time for us to stop expecting so much from our military when we give them so little in return. It’s time for President Trump to stop talking about making America great again but to take care of the very people expected to defend our country. It’s time for all of this red tape to stop and keep our most experienced and seasoned military personnel in the positions they excel in.

While President Obama also implemented policies that adversely affected military families, and Trump is as well, he is running the country like a for profit business, lining the pockets of his friends and business associations and leaving the everyday citizen out to fend for themselves. He speaks in generalities without having the knowledge or experience to understand how his words affect change and is so busy tweeting he’s forgotten that his most important job is that of commander-in-chief. A true leader leads by example and doesn’t behave like a schoolhouse bully. Our country feels less safe and we no longer look present like the superpower we once were. And we in the military, as well as civilian’s families are worse off now then when he first took office. America didn’t need to be great again. She was already great.

I know at a deep level that my family lived paycheck to paycheck. A check comes in. We pay our…

Stephanie Land reviews SMILF from the perspective of a single mom who’s been there...

I Went from Being Homeless to a Full-Time Writer. Trump Wants to End the Programs That Got Me Here.

Six years ago, I lived with my then 3-year-old daughter, Mia, in a studio apartment. During the day I worked…

Like the rest of the country, Gary, Indiana, is wrestling with what was, what is, and what may come...

Welcome to A Prairie Homeboy Companion

Welcome to A Prairie Homeboy Companion, a weekly blog exploring progressive activism in the Midwest, as well as an occasional…