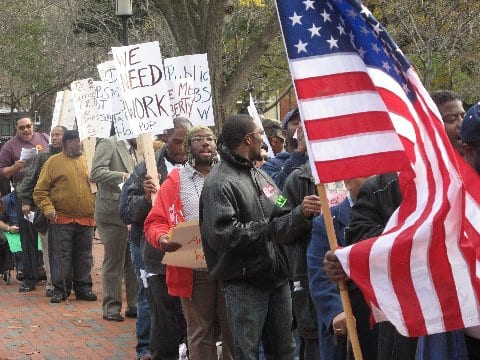 The War on Poverty, 50 Years Later

Today marks the 50th Anniversary of Lyndon B. Johnson’s State of the Union address where he declared the start of the “War on Poverty.” In 2014, 46.5 million Americans are living in poverty, with one in every three Americans teetering on its brink.

So what happened? Did a half-century of hard work on the parts of countless organizations and individuals fail? Did we lose the war?

We know that between now and 1964, much has changed. Since the 1960s, we’ve seen a rise in income inequality, an increased demand for a higher level of education to enter the middle class and greater role for women and people of color in the workforce.

What we haven’t seen in these last fifty years are policy decisions that reflect these changes. The federal minimum wage, for instance, has failed to keep up with the rising cost of living. Working parents with full-time, minimum-wage jobs are no longer able to provide their families with enough to meet their basic needs.

We’ve seen successes in these 50 years. Many of the social safety net programs started or expanded during the War on Poverty have helped countless families survive when they fell on hard times. If it weren’t for programs that provide retirement security, health care, child care assistance, housing, nutrition and unemployment insurance to those in need, studies show that our poverty rate would be double what it is today. And yet Congress is currently considering cutting some of these programs that are vital to the survival of so many Americans.

What we’ve seen over these last 50 years is not a failed War on Poverty; it is a failed economy. What we need, and what we will continue to fight for, is an economy that works for all Americans, not just the most wealthy. Rather than cutting our social safety net, this economy will continue and expand the social programs on which so many families rely. Rather than force America’s most vulnerable families to scrape by on less than enough, this economy will raise the minimum wage to an income that can support an American family.

We know what needs to be done. Now is the time to recommit ourselves to fight in order to ensure that no working American is trapped in the cycle of poverty. In the words of President Johnson, “We shall not rest until that war is won. The richest nation on Earth can afford to win it. We cannot afford to lose it.”

Click here to read more about the War on Poverty and where our nation stands 50 years later in this report by Half in Ten, a project of the Center for American Progress Action Fund, the Coalition on Human Needs, and The Leadership Conference on Civil and Human Rights.